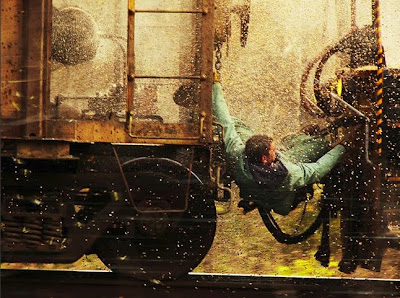 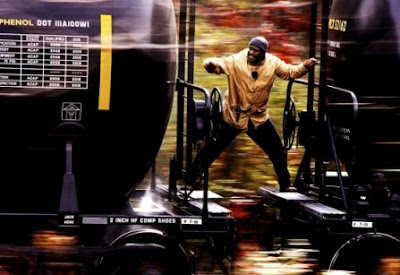 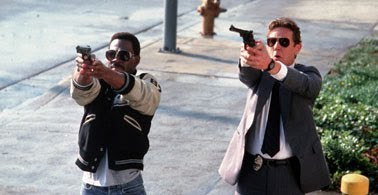 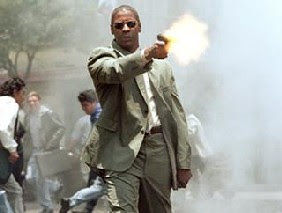 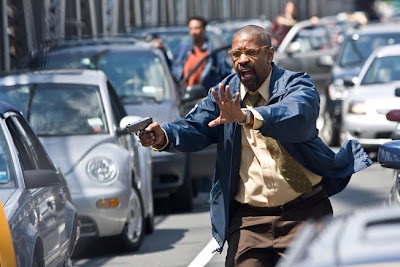 As the action gets started right off the bat, any character development of Frank and Chris happens on the rails. Frank is a widower with two daughters financing college by working at Hooters, much to Daddy’s angst. Chris has been slapped with a restraining order as a result of a misunderstanding and is trying to make peace with his young wife. Frank gives fatherly advice, and Chris begins to see that Frank knows what he’s talking about. After all, Frank can calculate the length of a train by the number of cars, and he knows when it will fit a siding and when it will not.

Meanwhile, Tony Scott heightens the suspense with the lightning-fast motion of speeding trains, cars racing in pursuit, and helicopters crisscrossing overhead. As in The Taking of Pelham 1 2 3 Tony Scott loves to shoot packs of wailing police cars, so after one such pack escorts a railway welder to the end of the line, the police cars follow, sirens wailing, even when it’s no longer necessary and really distracting to the guys trying to stop the train!

But the action is heart-pounding. Big bad Engine Triple-7 becomes an inexorable juggernaut reminiscent of the driverless truck in Spielberg’s The Duel, as it flicks a horse trailer out of its way like an insect and blows a freight car to flinders. Meanwhile, the crisis is turned into a sensational news event, complete with color-coded animated simulations of what will happen if Triple-7 hits that notorious curve at 70 mph, but too many abrupt cuts to TV broadcast views of the action sometimes deflate the suspense by relying on long shots when close shots would be more visceral.

Despite these interruptions and the cut to scenes in which a train company mogul calculates the losses over golf and stubbornly ignores Frank’s experienced advice, the inexorability of this runaway train builds suspense that’s hard to dilute. I could have done without cuts to the nail-biting or cheering of the fellow railway workers, wife, and daughters watching it all on television as the newscaster narrates the action like a boxing match, “He’s down! No, he’s up! No, he’s down again.” This is where Scott should have maintained the close-up action, but Washington and Pine establish believable presence and display a rugged charm and sense of humor that keep our attention on them and put us on the edge of our seats when they do everything they can to save the day. 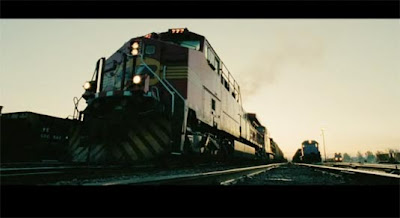 Posted by Richard Bellamy at 4:53 PM

Can't say I'm as big a fan of Tony Scott. But, I have been tempted to see this. Because I like trains. Maybe even more than helicopters. And this, you say, has a scene with a train and a helicopter? It's like a dream come true!

In case it isn't clear, I really enjoyed your review. Did you happen to catch the hysterical parody of the "Unstoppable" trailer on last night's SNL? I've been linking to it all day, so may as well do so here.

I didn't see SKYLINE yet, but did manage UNSTOPPABLE on Friday evening. I know the film received surprisingly impressive reviews, but I couldn't get by the cliches and the predictable premise. Denzel didn't do very much, and the narrative was rather a lot of hot air. I preferred that Jon Voight film from years back. (RUNAWAY TRAIN)Nonetheless you pen an impressive defense here, illustrating just why you feel this film is clicking on most cylinders. Fair enough I say.

Craig - I checked out the mock preview. It's hilarious! Great Denzel imitation! Love the bits abou the Chrysler Building.

I love trains, too. Love the movie The Train with Burt Lancaster.

Well, this movie will give you a heavy dose of trains.

Sam - Sorry you couldn't get on board (sorry) with this one. I just let it take me for the ride (sorry). I don't know if the movie had enough time to get beyond the cliches, and I don't know if it could prevent being predictable - though I think it kept you wondering what the chief welder's plan was. Interesting about Jon Voight in Runaway Train because the shot of Denzel on the roof of the car with his arms spread seems to evoke that film.

Craig and Sam, thanks for the compliments.

Hokahey, my wife Lucille completely agrees with you, and took me to task in the car on the way home from the multiplex.

My wife is a school principal, and I'm a plain and ordinary teacher who works under her. I lose here!

Good point about that Denzel "homage" there to Voight, unconscious or not.

Sam - I also saw it with my wife. It was interesting to see a lot of younger couples there as well. It was a date movie that could satisfy either sex - action for guys, Chris Pine for the gals.