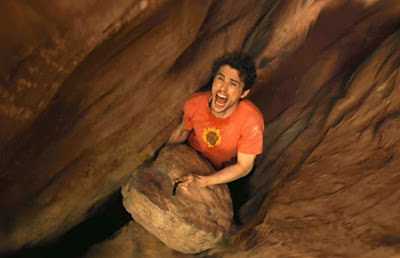 With his rugged good looks and athletic frame, James Franco is the perfect choice to play Aron Ralston, and in this role Franco displays a range he hasn’t formerly explored. When Aron starts out on his trek, Franco exudes the hyper joy to be running wild outdoors. As Aron looks into his camcorder, and looks into his soul, Franco shows Aron's implacable determination to free himself by any means he can invent, and dark despair as he chips away uselessly at the rock, tries to keep warm at night, and drinks his urine to stave off the dehydration that is a major factor in his undoing. Foolishly, he carries only one bottle of water in a climate where dehydration comes quickly, and he forgets a large bottle of Gatorade, a blunder that is strikingly shown when the route of Aron's journey is speedily reversed all the way back to his bike and then all the way back to his truck where the bottle lies abandoned in the back.

Inevitably, Franco’s deeply invested performance and Danny Boyle’s talented direction carry us from enthralling moment to moment, and we come to Aron’s gruesome resolution with a strange feeling of relief as Aron successfully hacks his way through his arm to free himself. The acknowledgement of his failings and his resolve to make amends, accompanied by memorable images such as his boyhood face peering over the rock and the family couch in the dusty canyon, make his bloody liberation an intensely emotional one. And as Aron, amazingly, rappels one-armed down a rock face and staggers toward rescue, the courage and resourcefulness he gleaned from his self-alienating periods of isolation ironically save him.
Posted by Richard Bellamy at 10:18 PM

The "oops" scene is one of my favorites, too, because of how Boyle captures it. Franco's Aron says "Oops" first to his camcorder, for which he is performing. Then he mutters "oops" again, and although Aron's camcorder is still running, Boyle captures the second oops from a different angle, off to the side an a little lower, as if we're spying on Aron in a private moment. For me, that second camera angle is more intimate, where as the first one is (appropriately) a performance by Aron. It's good stuff. A smart use of multiple angles.

Likewise, the first time the camera takes us up the hose of Aron's drinking pack, I thought it was an unnecessary gimmick. But the payoff comes later when instead of cool water rushing up the hose we see Aron's thick, yellow urine instead. Effective!

When I saw it again last night, I noticed that the "Oops" moment I write about here is indeed the second one, the more private one.

Also, the rising urine is chillingly suspenseful in the same way a scene involving some approaching menace can be. "Here it comes! This is it!"

I also noticed that Boyle makes the best use of the tight space in which most of the story takes place. He shoots from above - and after numerous close-ups - he pulls the camera back down the narrow slit.

I knew you'd like this one. Your cup of tea--or some other liquid. Only you would find "rising urine" to be "chillingly suspenseful." Mine is warm.

Thanks for the comment, Yuba Guy. You should see this movie. Somehow, I thought of you when I was watching. You're not the outdoor thrill-seeker Ralston is, but I guess the bleak beauty, heat, and isolation of Canyonlands reminded me of Yuba City. If you venture into Sutter Buttes by yourself, don't forget to bring a sharp knife.

As you know I'm with you on this one as potentially one of the year's best, but just wanted to add that the "oops" scene was the one that rocked me as well. It wasn't that we all knew how Ralston ended up in that situation, it was that he acknowledged it. It must have been as much a moment of horror for him as the initial entrapment.

I've always been a fan of Danny Boyle, but I was not so keen on James Franco. This film changed my opinion on him, after only being exposed to Franco through films such as Spiderman, Pineapple Express, and Milk, it was great to see another side to him and experience his deep range. I loved 127 hours, the montages and the overall editing gave it a great aesthetic, and I look forward to more films by both Boyle and Franco

I accidentally deleted a comment by Malcolm about Danny Boyle's direction and Franco's acting. Sorry! Thanks a lot for stopping by and leaving the comment, Malcolm. I agree. I love Franco. I even enjoyed him in his early stage in adventure movies such as Flyboys and Tristan and Isolde. I hope to see more of Franco too!