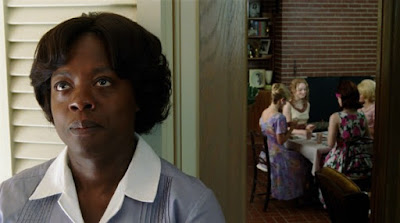 Tate Taylor’s The Help, based on Kathryn Stockett’s bestselling novel, is well worth seeing for the acting. Most outstanding is Viola Davis as Aibeleen Clark, an African American woman who bravely agrees to reveal her stories about being a maid in a white household in the Jim Crow South. Asked how she felt taking care of a white child while her own child was at home with someone else, Aibeleen’s pain is seen in her inability to respond. Throughout the film, Davis shows worlds of pain and indignity in her eyes and facial expressions.

Also outstanding is Jessica Chastain as Celia Foote, an endearing “white trash” blonde bombshell who married into wealth and who tries to get accepted by the intolerant queen bees of the bridge club. She cares little about racist etiquette, and her humorous, upstart nature is a pleasure to watch as Chastain effortlessly fills her character with believability and life. Octavia Spencer is much fun to watch as Minny Jackson, the sassy African-American maid whose rebellious nature gets her fired, and Bryce Dallas Howard, as Hilly Holbrook, the film’s resident out-and-out racist bitch, convincingly plays an out-and-out racist bitch. You can see it in her eyes and in the way she stomps around on a tirade, but the histrionics are hardly necessary to convince us of what Howard has already convincingly shown us more subtly. 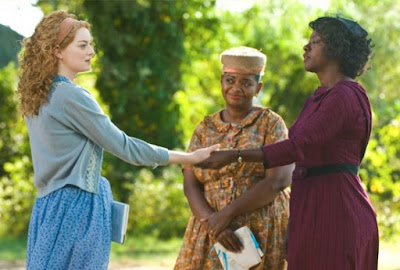 At the center of the story is Emma Stone as Eugenia “Skeeter” Phelan, the iconoclastic daughter of a Southern land-baron family, graduate of Ole Miss, who aspires to be a journalist and has the idea of chronicling the hardships and demeaning conditions suffered by African American maids in Jackson, Mississippi, in the first half of the 1960s. Stone is always endearing and engaging; her presence demands your attention. She employs those talents here, but her character is more vehicle than fully developed person. She is there to be so compassionate and so devoted to her project. Heaven forbid that it should be revealed that she wants to help the Civil Rights cause, but she also wants to make money and a name for herself.

In The Help characters do not attain any sort of complex dimensions. It is revealed that Skeeter’s mother, nicely portrayed by Allison Janney, fired Constantine, the maid who reared her daughter from infancy and instilled courage and decency in her, just so that she wouldn’t be kicked out of the Daughters of America, but the remorse she displays is merely going through the motions, and her action doesn’t generate much rancor between mother and daughter. As Constantine, Tyson is touching in her brief scenes but nothing ever explains how a woman, hired to work for a pittance, can offer such motherly tenderness to the daughter of her employer.

As a look into the lives of African American maids working for white households in the Deep South during the height of racial tension, this could have been a fine film. But the film straps itself to the novel’s fanciful device: a white woman, an aspiring journalist, sets out to interview African American maids, record their stories, and publish these stories in a book called The Help, thereby exposing to the world the indignities they have suffered. I don’t think it’s spoiling anything to say that, obviously, that’s exactly what happens. The book comes out, with its silly blue and white bird (why a bird?) on the worst book cover I have ever seen, and everybody reads it, and the maids who contributed their stories are applauded at church, and Hilly Holbrook stomps around in a rage because Minny’s very embarrassing act of vengeance for Hilly’s intolerance is exposed to the world. 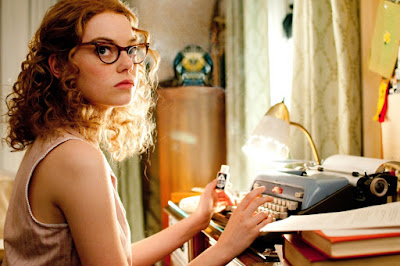 On top of that, Skeeter gets hired by Harper and Row. (Mary Steenburgen is mere caricature as Elain Stein, the tough-as-nails editor who is so exacting with Skeeter’s project, and yet she allows the book to be published with that ridiculously bland cover.) In addition, Aibeleen is fired but she is filled with hope for the future. Meanwhile, where are the fire-bombings of the homes of the women who contributed to this incriminating book? What’s the KKK doing during all of this? Sleeping? Or too busy beating Freedom Riders and burning their buses? And Skeeter might have been able to leave the South and be safe in New York, but I imagine her family’s house would have been burned to the ground.

There are moments of poignant truth in The Help, most of them involving Viola Davis, but these snippets of verisimilitude are swamped by the film’s tendency to deflate the drama with comedy, most of it centered around the type of gag more appropriate to a film like The Hangover, and the plot device of the book that leads to more fantasy than reality. Meanwhile, the whole thing takes place in interiors and exteriors that are so perfectly early 60s: the formica kitchen tables; the archaic television sets; and the diners with booths and counter and egg salad sandwiches with chips. Every prop tells us that this story takes place in the 1960s, but none of it looks lived in. If Disneyland had a 1960s World, this is what it would look like, all bright and clean and plastic. As for the film's tone and content, it's all Disneyland too.

Posted by Richard Bellamy at 5:24 PM