Rise and Fall: Rise of the Planet of the Apes 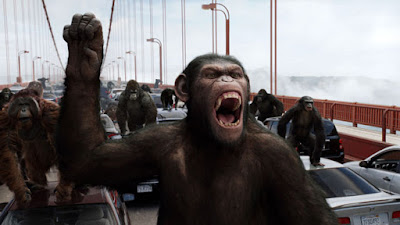 Planet of the Apes (1968) is well known for many reasons: its honorary-Oscar-winning makeup; its catchy one-liners (“Take your paws off me, you damned dirty ape); Charlton Heston, the man who played Moses, as a cynical misanthrope; Heston in the nude playing a cynical misanthrope; model Linda Harrison playing the mute but very curvy Nova. But it’s most well known for its very dramatic, shocking surprise ending, which may not have been much of a surprise to viewers coming to the movie on VHS or DVD. Back in 1968, sixteen years old, I was totally surprised. When the famous reveal came, I almost felt a palpable kick taking me from what I had totally accepted as an alien planet and jolting me back to Earth.

What seemed to contribute most to the success of that reveal was, in my opinion, the effective degree to which the film immerses you in an otherworldly world from the moment Taylor (Heston) and his crew fall out of space and crash-land to the point at which Taylor and Nova wander off in the film’s final shots. Memorably, the film employs locations in Arizona for its stark “Forbidden Zone,” and the squat, earthen dwellings of the apes resemble the suburban homes of Bedrock, but they definitely look alien placed in a little valley in Malibu Creek State Park.

In addition, a number of little details contribute to the otherworldliness: the leather smocks worn by the apes, color-coded according to caste; the slanted, grease-smeared, Impressionistic bars of the cages; the dark chapel where a funeral is underway; and the natural history museum in which stuffed humans are used in the exhibits. Finally, there’s something very unsettling about the very prejudiced, militaristic, bureaucratic society in which Taylor finds himself, a “mad house” in which, at first, he can’t utter a word in his defense and when he is able to speak, he still finds it impossible to reason with his intractable captors. This world totally took me out of myself and far away, so that when the famous reveal slammed me back to Earth, I was stunned. (Also, the sequence in which the apes make their first appearance, hunting humans in a cornfield, is a very gripping, superbly edited sequence.)

As an origin story for the apes saga, Rise of the Planet of the Apes clearly sets up the groundwork for how the whole “mad house” planet gets started. Chimpanzees develop super intelligence by means of an experimental drug, developed by Dr. Will Rodman (James Franco), designed to repair the brain and cure Alzheimer’s, but the drug has an unfortunate side effect for humans that will take care of the human species and ensure simian dominance. Also, very nifty, simian subjects of the medicine pass on their attributes to their offspring genetically.

As a movie, Rise of the Planet of the Apes has its ups and downs. First of all, it goes it strains hard to allude to the classic original in multiple ways. There are so many allusions you find yourself playing “Spot the Allusion” instead of watching the movie. One or two allusions would have been nice. I would have been happy with the shot of the youthful Caesar (Andy Serkis in motion capture) trying to fit the crown on a model of the Statue of Liberty. A nice touch, that one allusion encompasses the entire 1968 film. Rest there! Instead, the film goes as far as to use the famous one-liner, quoted above. But the line can’t help but raise a chuckle, detracting from a potentially dramatic moment. And the name-dropping, tying in with the 1968 film, gets out of hand: Bright Eyes, George, Maurice, Cornelia, Landon, Dodge. Are there more? (The space ship on its Mars mission is called the Icarus, a name given to Captain Taylor’s ship after the original movie.)

Especially in the beginning, the film suffers from poor writing. One of the first scenes includes stilted dialogue we’ve heard countless times. “The drug has been successful so far. It’s time to try it on human subjects.” “It’s too soon! We’ll let the board decide.” And, of course, in a scene that’s nearly identical to the one in Splice, which this film resembles in many ways, it becomes obvious to the board that the drug is problematic when a crazed chimp flies through the window and lands on the conference table.

Meanwhile, the film stacks the deck ridiculously when it comes to building a motive for Caesar’s revolt. It would be enough that his mother and other chimps had been stolen from their jungle homes and brought over to America to be used as guinea pigs for a dangerous drug. When Rodman quits the program and provides a safe haven for the orphaned Caesar, the research project is taken over by mercenary Steven Jacobs (David Oyelowo) who wants to push ahead, no matter what, when he learns that Rodman has been treating his Alzheimer’s-inflicted father, George, on the sly and that the drug increases intelligence. Seeing multiple dollar signs in front of his eyes, Jacobs does a complete 360 in attitude toward the project. (SPOILER: Jacobs deserves his comeuppance when it comes, but Oyelowo certainly doesn't deserve the poorly conceived role he has been assigned; the writers should have taken his place in his plunge off the bridge.) Later, when grown-up Caesar gets out of hand at home, he ends up in an “institution” for primates which is managed by a sleazy warden named John Landon, and his slimy son, Dodge, played by Tom Felton as a sadistic psycho. On top of that, there are no nice neighbors. One neighbor wants to club Caesar with a baseball bat when he reveals himself to his kids; another neighbor wants to beat up George, and then runs in terror from the chimp. Hell, I’d love to have a chimpanzee living next door, rather than the neighbor I call Grass Crab who yelled at my son for riding his bicycle over a small corner of his finely cultivated, manicured lawn.

Despite its drawbacks, Rise rises to the occasion and delivers lots of entertainment. It must be some built-in, primal connection to evolution that makes us humans so fascinated by primate behavior, and it’s lots of fun watching a chimp act like a human. The Planet of the Apes movies, in all their cheesiness, had that going for them, as well as the striking contrast of apes standing upright, talking, exhibiting human foibles, while subjugating those high and mighty humans who thought they were so great. Rise has all that going for it plus more during the delightful sequences chronicling Caesar’s upbringing. It’s also a joy when Rodman and girlfriend, Caroline, (Freida Pinto), the film’s pretty face and an expert on ape behavior, take Caesar to Muir Woods (the entrance to the part depicted is an entirely fanciful rendition of the real, highly frequented tourist attraction) where the young chimp clambers up the tallest redwood tree.

Later, the incarceration sequences are done as a sort of primate Shawshank Redemption, complete with sadistic guards and requisite prison yard bully, who actually flicks off the preening fingers of one of his hovering bitches, and a hilarious scene in which Caesar and his orangutan partner (think Morgan Freeman) sit looking over the prison yard, quietly discussing escape in surreptitious sign language. But these silly bits lead to mounting suspense as Caesar readies his fellow prisoners for the great escape.

When the final battle comes, a wonderfully suspenseful and entertaining set piece staged on Golden Gate Bridge in an approaching fog, it’s all fun summer entertainment. I found it thrilling, and I enjoyed its surprises, which I won’t spoil here. Throughout, I was certainly on the side of the apes; screw you, fellow humans.

Caesar, at all ages, is an obvious motion-capture rendering, sometimes too cartoonish in the face, often too swift and fluid in shots of running or swinging or climbing. But the development of Caesar’s emotions, as captured in his face, is the film’s strongest achievement, as we watch Caesar develop from a wide-eyed, curious, mischievous youth, to a crafty prison breaker, to a clever strategist and a merciless leader. Meanwhile, the CGI is spot on and eerily realistic in some of the full shots of Caesar, leading the rise of the apes, and a very chilling shot of the sinister Koba, lurking in Caesar's shadow and looking diabolical. 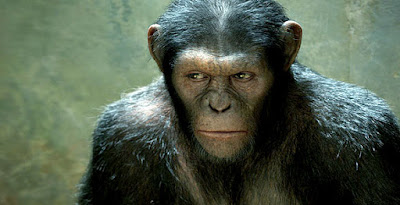 I am a big fan of the 1968 film, and I have to say I enjoyed Rise immensely for its revisiting of an unsettling, very otherworldly cinematic world, though it is definitely at its best once the rise begins.
Posted by Richard Bellamy at 2:30 PM