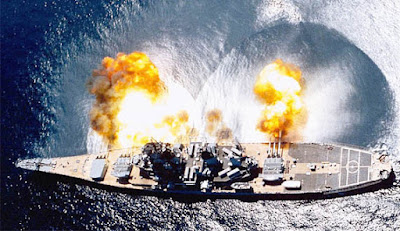 Boom, indeed! There is a lot of action in Hasbro’s movie, Battleship, but you have to sit through a painful thirty minutes before the action gets started and the fun begins.

When it comes to alien invasion and “the war of the worlds,” Wells and Spielberg knew that it’s crucial to get the aliens down to Earth and get the party started.

The big failing of Battleship is that it wastes time with unnecessary nonsense and terrible writing before the aliens are introduced. First, we get the year’s worst opening scene in which Alex Hopper (Taylor Kitsch of John Carter) tries to pick up a gorgeous blonde bombshell (Brooklyn Decker), dressed in tight white top, who inexplicably walks into a scuzzy bar and orders a chicken burrito. “I’m hungry,” she explains. No McDonald’s open? The ridiculous extremes to which Hopper goes to acquire said chicken burrito constitute the year’s worst scene.

This is followed by disgusting propaganda that turns physical therapy sessions for amputees in a VA hospital into a music video designed to advertise all the great things technology is doing for the American servicemen who have lost limbs in Afghanistan and Iraq.

Then, suddenly, the film leaps forward what must be years during which Alex Hopper’s upstanding Navy commander of a brother (Alexander Skarsgard) forces Alex to join the Navy in order get his act together. The next thing we know Alex is a lieutenant in charge of weapons firing aboard a Navy destroyer. From burrito thief to naval officer in a matter of seconds!

Unforgivable nonsense over, the alien ships splash down, Hong Kong gets pulverized by a crash-landing communications ship, and what follows is one of the best of the many alien invasion action movies released in the past few years. Unlike in the very boring The Avengers, the action is not a dizzying blur of motion. Instead of focusing on a wild confusion of flying things, we get simple duels between Navy destroyers and alien monster-craft. It’s always clear what’s going on; it’s never too fast to follow.

Taking nothing more from Hasbro’s popular game than its title and a scene in which Lieutenant Hopper uses a radar grid to strike at alien ships, Battleship has the old-fashioned beauty of the type of action we get from Captain Horatio Hornblower (1951), Run Silent, Run Deep (1958), and The Enemy Below (1957), movies in which the vast sea clearly delineates the combatants and the fighting takes place in the middle of an unforgiving element.

But ship vs. ship combat movies need a Captain Hornblower or a Captain Kirk, and here the hot dog naval officer who has the nerve to make the risky decisions is played charismatically by Kitsch who showed his talent for corny heroics in John Carter. In Battleship he shows that he can carry a film that could easily dwarf a lead performer with its displays of massive CGI.

Said displays of massive CGI are ten times more satisfying than the noise and confusion seen in The Avengers. Here the alien craft do interesting things that the eye can follow. The inexorability of the alien’s buzz-saw-like attack drones, the type of inexorability done so Aliens, are responsible for some of the year’s best action.

Meanwhile, the aliens are interesting critters whose facial features are closely examined as Hopper examines a supposedly dead invader. They are not just prickly green men with four fingers instead of five. We may not care about them, but they have minds and needs, and perhaps most of them are just military grunts (like the countless American and Japanese sailors who die fighting in this story) thrust into high-tech warfare in which body armor can do little to protect very vulnerable flesh and blood.

Yeah, you have to cringe for a good thirty minutes (or maybe it just seemed that long), and there is the silliness of macho bravado scattered throughout the film (double Army amputee goes takes on an alien with his bare hands; ancient World War II veterans do The Right Stuff slow-mo strut), but the action keeps your attention, we keep rooting for our fellow Earthlings, and the entrance of the titular battleship into the story is good, old-fashioned, action-movie fun. When a gunnery officer, played by Rihanna, says “Boom!” before she dispatches the bad alien at the very last minute, you are invited to chuckle, sit back, relax, and enjoy a very entertaining ride.
Posted by Richard Bellamy at 10:10 AM