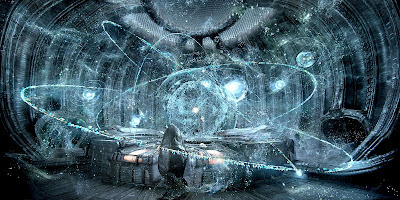 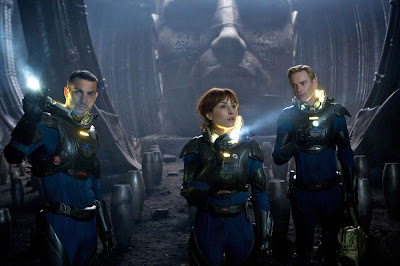 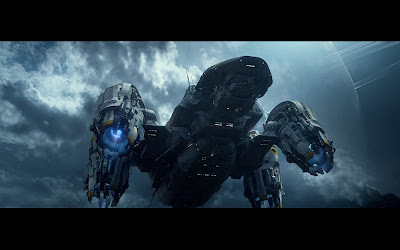 Deep down I’m a sci-fi geek, and I have a lot of admiration for Alien. I enjoyed Prometheus, despite its flaws, and got a lot of satisfaction out of the nifty tie-ins to the other Alien movies. I loved the cryodeck; the breakfast table chillingly reminiscent of the original chest-burster scene; David shooting the perfect basket, an allusion to Alien: Resurrection; the unveiling of the “space jockey’s” seat; the horseshe-shaped alien ship; the artwork inspired by H. R. Giger; and all the elements of the creature’s biology that will combine to form that awesome fucker that causes such terror aboard the Nostromo. I also liked what I took to be an allusion to 2001: A Space Odyssey: the aged, wrinkled Weyland sitting on the satin-covered bed, in a room with white floor panels, as he prepares to learn the truth about man’s evolution. 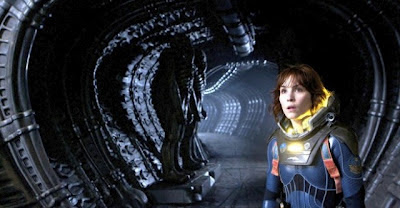 As for the performers, Noomi Rapace, in the role of Elizabeth Shaw, seems ill-cast, but she works her way into her role, builds up her presence in the film, and when she heads for the med pod, she’s awesome. Charlize Theron, coming right from Snow White and the Huntsman, seems in a wicked witch rut, but she has some good moments. “My room. Ten minutes.” Michael Fassbender does the most with his role. He gets a little silly, but only momentarily. He makes the early sequence when he’s the only one awake on the ship the best part of the film, and he carries much of the movie with his cold, inexorable pursuit of his directive. Finally, the best performance by a prop goes to the med pod that does emergency surgery on Shaw in the film’s most gripping scene.
Posted by Richard Bellamy at 8:12 PM