A Few Reluctant Thoughts on Kick-Ass 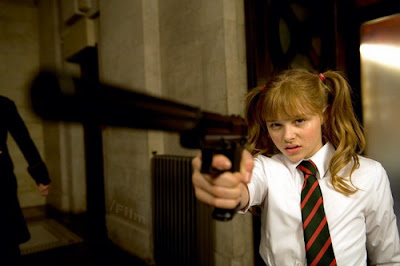 Why reluctant? Because I'm not sure this movie deserves even a few thoughts.

The preview makes it look like a PG-13 teen action comedy. Then I noticed its R rating. As soon as a gangster snips off a suspected stool-pigeon’s finger with huge clippers, I knew I was in for a bloodbath.

Once again, we get the slow-mo shooting and martial arts sprees of The Matrix, whose style spawned an epidemic that just won’t quit. Here the twist is that most of the super-killing is done by “superhero” Hit-Girl/ Mindy Macready (Chloe Grace Moretz), an 11-year-old girl raised for revenge by her ex-cop father Damon/ Big Daddy (Nicolas Cage). She wields lance, throwing knives attached to string for easy retrieval, all sorts of guns, and her fists. She appears in school-girl’s plaid skirt and white blouse and shoots guards with a silencer. She slaughters many, and as she impales her enemies or goes for effortless head shots as she somersaults through the air, as her face gets bloodied in fisticuffs, there is something disturbingly obscene about the whole thing.

The film promises some potential working as the Superbad of teen superhero movies, with Aaron Johnson as likable dufus-faced Dave Lizewski, an invisible nobody comic-book nerd, who dreams of getting the girl, who responds to life’s injustices by donning a silly green superhero suit and going out to stand up for justice. A severe beating destroys his nerve endings and leads to metal replacements for many of his bones. Thus, as he continues building his reputation as super-boy “Kick-Ass,” he is able to suffer super beatings though he can’t quite deliver super beatings of his own.

But the focus on Kick-Ass is sidetracked by the vengeance tale of ex-cop Damon Macready (Nicolas Cage), who trains his cute little daughter to wield every kind of weapon in revenge against scum-bucket Frank D’Amico (Mark Strong) and his crime ring. Once the film stages tired, unimaginative action sequences echoing The Matrix and Kill Bill, Vol. 1, the movie lost me, and all you’re left with is little Chloe Moretz as Hit-Girl wreaking endless bloody havoc, and Nicolas Cage as superhero Big Daddy, dressed in Batman costume and doing an imitation of Adam West’s stilted delivery that is nothing but annoying.

If you never get tired of slow-mo gun battles reminiscent of The Matrix, or you want to see an 11-year-old girl shoot people in the head, this is the movie for you.

Posted by Richard Bellamy at 2:31 PM

Your review is funny, but I think a bit harsh. I liked the way Kick-Ass played with and updated comic book movie genre conventions. Your thoughts emphasize the cliched elements of the movie without acknowledging any of the cinematic allusions (such as Taxi Driver and Sunset Boulevard) or the odd way the film subverts Spiderman 2. On the other hand, I had problems with the dialogue, the adolescent wish-fulfillment, and the ultraviolence when it just seemed gratuitous. I hope to write a post about it soon.

FilmDr - Thanks for your thoughts. I acknowledged allusions to The Matrix and Kill Bill. I liked the references to the films in which the narrator actually turns out to be dead - but I thought the Taxi Driver allusion came off as tired and lame. All the clever bits were just not enough to save this film for me. In my opinion, the violence gets gratuitous very quickly. I look forward to your post on this.

I liked it, in a wowreally kind of way. Underneath all the serial-killer fantasy stuff, it was actually much more intelligent than it should've been, I think. Funny review, anyway.

I was especially tickled to hear Dave allude to Sunset Boulevard because I'm about to teach it tomorrow. Dave also mentions American Beauty and Sin City. The music of Kick-ass refers to spaghetti westerns and A Clockwork Orange (as if to give the film a Kubrick gloss). Maybe I was intrigued by the film's cynical blend of the allusive and the stupid.

FilmDr. - Yes, the film is clever about alluding - but not clever enough about building its own independent strength as a story worth watching. To tie in Simon's comment here - I too detected some "intelligence" in the film's development of the main character, Dave, who is a believable, likable character, but he is quickly overshadowed by a subplot that gets ridiculously out of hand.

Regarding Doc's comments about the allusions, I think that some of them are clever (its routine comparisons to surface elements like the violence in Taxi Driver are a bit wry), but for the most part it simply speaks its references aloud, not even visually recreating something from another film, much less reworking its context. To me, simply saying "Sunset Boulevard" aloud isn't an allusion any more than "What's the deal with ____" is itself a punchline.

I think Kick-Ass fails because it brings up a number of smart questions -- the price of vigilantism, how the thirst for revenge taints more than just the wronged, whether an ordinary person (though they ruin this by giving him damaged nerve endings and reinforced bones) really can be a superhero in the modern world -- and then run away from them in the desperate attempt to be as stupid as possible. As a result, it tries to be dumb in a clever way and only looks worse in the effort.

Jake - Thanks for the comment. Obviously, I agree. "In the desperate attempt to be as stupid as possible" - this is well said. By the time it got to the final bloodbath, the film had already throttled itself with excessive ridiculousness - but the crowning stupidity came with the Gatling gun-armed jet pack and the killing of the mob boss with the bazooka.