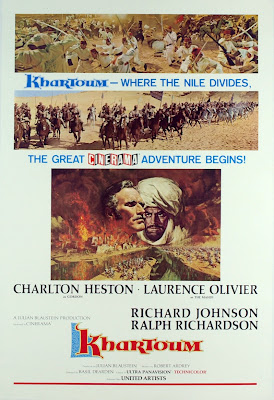 In Lawrence of Arabia (1962) Prince Feisal (Alec Guinness) scrutinizes the young Englishman standing before him in his tent: T. E. Lawrence (Peter O’Toole). “I think you are another of these desert-loving English – Doughty, Stanhope, Gordon of Khartoum.” (Charles Doughty was an 19th century writer who wrote a travel book about the Sahara that inspired Lawrence. Lady Hester Stanhope was a 19th century writer who dressed as a male Bedouin to travel across the desert.) Feisal goes on, “No Arab loves the desert. We love water and green trees. There is nothing in the desert. And no man needs nothing.” This is beautiful writing, and also very true. The Arabs don’t understand Lawrence’s masochistic love of the desert, an aspect of his enigmatic character that makes him so intriguing. Similarly, Charles “Chinese” Gordon, as played by Charlton Heston in Khartoum (1966), is at home in the desert, and the depiction of his enigmatic character is the best part of this epic film.

As a boy going to the movies in the 1960s, I had a great passion for the huge historical epics of that decade, and I still hold a fondness for them today. One of my favorites is Khartoum (1966), directed by Basil Dearden, the stunningly visual account of the Mahdist Revolt in the Sudan in the 1880s, the fall of Khartoum, and the death of Charles “Chinese” Gordon (Charlton Heston). The film also stars Ralph Richardson, Laurence Olivier, and Richard Johnson.

Filmed in Ultra Panavision 70 (and exhibited in 70mm Cinerama for premiere engagements), Khartoum fills its expansive frames with the Sahara Desert, the Nile, desert hordes, and a sprawling assault on Khartoum by hundreds of extras, as it depicts the efforts of British soldier of fortune Charles “Chinese” Gordon to hold the city of Khartoum together during a siege by the forces of the Mahdi, Mohammed Ahmed (Laurence Olivier), a Muslim crusader who declares holy war on the infidels of the Sudan.

After an opening scene in which a large British-led Egyptian army is ambushed in the desert and massacred by a Mahdist horde, the action moves to London where the British public cries out for vengeance. Unwilling to commit England a war in the Sudan, Prime Minister Gladstone (Ralph Richardson) wonders what to do. He can’t send an army, but he’d like to send a gesture, and one of his advisors suggests, “Send Charles “Chinese” Gordon,” a hero to the Sudanese for working to end the slave trade. It’s a good idea, but Gladstone is wary of Gordon, fearing he will supersede his orders (which he does).

A fervent Christian, a brave adventurer who led a Chinese army into battle during the Taiping Rebellion carrying nothing but a cane, thus earning the nickname “Chinese,” Gordon is an egotistical oddball. Putting on a commendable British accent that might remind you of Ronald Colman, Heston shows us this hero’s quirks. Addicted to brandy and soda, he sips his drink while reading the Bible. But he is at home in Arab culture. He appreciates a good cup of arak and can ride a camel.

Gordon reads the Bible and says his prayers, but he’s a tough customer. During the siege, he sentences a friend to the firing squad for selling vital stores of grain. Fittingly, Gordon is up against another tough customer, Mohammed Ahmed, the Mahdi. His face covered with what looks like shoe polish, Laurence Olivier shows the Muslim crusader’s fanaticism in conflict with his appreciation for Gordon, this “desert-loving” Englishman who is also fervent about his religion. With a thick accent and operatic hand gestures, Oliver overacts, but he still creates a formidable foe whose passion for ridding the Sudan of infidels comes up against a similarly driven man with a passion for saving the Sudan. The Mahdi might ruthlessly slaughter infidels in the name of peace, but he points out that Gordon also used ruthless methods to bring peace to the Sudan. “Whisper to me, Gordon Pasha, is there a difference?” But the Mahdi doesn't want to turn the Englishman into a martyr. He realizes the truth of what Gordon says in a later visit. "If you, as a servant of your God, must use one hundred thousand warriors to destroy me, a solitary servant of my God, then whisper to me, Mohammed Ahmed, who will be remembered from Khartoum, your God or mine?"

While Khartoum focuses on an intelligent characterization of Gordon, it also presents the battle scenes expected of 60s historical epics. While one set piece battle in the film’s middle is nothing more than ranks of firing infantry and horsemen biting the desert, three of the battles stand out. My favorite involves a Nile steamboat trying to run the gauntlet past a town full of ambushing Mahdists. In the opening ambush, masses of spear-wielding Mahdists pour over the bluffs surrounding the doomed Egyptian army. But in this scene, and in the climactic final assault on Khartoum when hundreds of extras spill over a desert ridge and swarm the city, the action is not always extreme long-shot masses of indistinct combatants. The camera takes time to zero in on more immediate action: Mahdists aiming a threatening cannon, only to be taken out by a direct hit; attackers attempting to blow up the gate; Gordon firing his revolver down from horseback and then suddenly lurching to the side as his horse is shot. Sometimes the camera follows charging horsemen toward a bridge that suddenly blows up in your face. Or bomb-carrying spears sail through the air and explode right in the camera’s eye.

Another formidable foe so wonderfully filmed is the Sahara desert. Khartoum is surrounded by a vast wasteland, and this will make it hard for the British relieving force to come to the rescue. By means of the confluence of the White and Blue Nile, and a moat, Gordon turns Khartoum into an island in the desert. But the Nile will fall, and Gordon knows that the Mahdi and the desert will defeat him. He has always known his destiny lies in the desert. Ominously, this comes to him in the curse of a bitter sheik whose son he had executed for slaving. “Get thee from my house and may ye die in the desert untended. May vultures consume thy flesh, sands thy blood.” And that's good writing too. 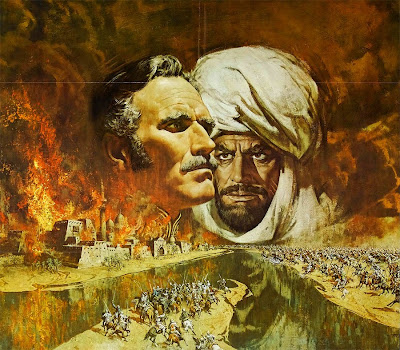 Nice post. Isn't the film a little cheesy? Making Olivier a Muslim reminds me of Alec Guinness playing an Indian in A Passage to India. I tend to be distracted by the bizarre Anglocentric casting in those older films.

Thanks for the link.

Thanks, FilmDr, yes, there is a modicum of cheesiness to the film, but for me the characterization of Gordon and the epic visuals compensate greatly. Back in the 60s it was just the way - to cast Anglos as Arabs. Now we have a lot of Arabic actors - who have provided a lot of great acting for the recent trend of movies about terrorism or Iraq.