The Kids Are All Right - and Eating Well Too 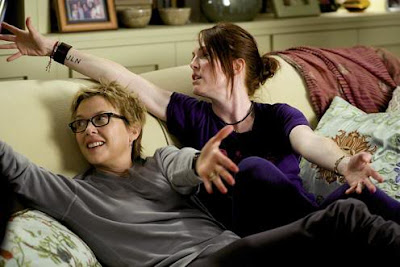 (To avoid any sort of SPOILER, skip the first paragraph and proceed.)

We’ve seen this before. The wife or husband suspects that spouse has been unfaithful. That dawning realization comes as a sock in the belly. It’s no different for Nic, a female doctor, when she realizes that her female partner has been sleeping with someone else. This is the film’s most masterful moment. Close up on Nic (Annette Bening). Motion slows. Sound fades. She scrutinizes her partner, Jules (Julianne Moore). She is alienated by what has happened, trapped in a small space in hell, and you can practically hear her anguished thoughts.

In The Kids Are All Right, the depiction of a family that has two Moms and two children, each child conceived by means of artificial insemination by one of the Moms, this moment transcends differences and shows us how hard it is to be a parent and spouse, no matter your sex, no matter the sex of your partner. It is a universal moment. And there are other universal moments like that from other points of view. The amazingly talented Mia Wasikowska plays Joni, an 18-year-old girl poised between high school and college, and she is that character in body posture and facial expressions during every second of her time on screen. In one brilliantly touching shot, her lower lip trembling so convincingly, she watches Moms and brother, Laser, (Josh Hutcherson) drive away after dropping her off at college, and we can see her poised between her childhood and a new phase in her life.

Throughout the film, director Lisa Cholodenko nearly always gets the best out of her five key performers – and they work to present slices of life that portray the warmth, confusion, and hurt of parenthood, love, growing up, and establishing your identity. Wasikowska stands out in her depiction of a budding young woman’s anxieties about identity and sexuality, while Moore does a remarkable job of delineating the character of Jules, the more sensitive partner who has had trouble finding herself and establishing a career. Bening’s performance has some stilted, off-key moments, but she does an admirable job of investing herself in the character of Nic, the backbone of the family, driven to make sure the kids, and her partner, are all right.

Mark Ruffalo is assigned the tricky duty of playing through a somewhat melodramatic climax, but Paul is the most colorful character – the earthy, wayward biological father of both Joni and Laser, who finds purpose in getting to know the results of his semen donation, and who is tempted to insinuate himself a little too far into a tightly knit family. An earthy dude, owner of an organic restaurant and member of an organic produce garden coop, Paul is the quintessential self-centered, motorcycle-riding Southern Californian doing his thing, perhaps realizing that doing his thing is getting a little bit lonely. Ruffalo dominates every scene he plays and provides humor as he assumes the duty of being our eyes on the workings of an alternative family dynamic.

As a side note, I enjoyed the film’s healthy, edible mise-en-scéne. In one of his first scenes, Paul carries a basket of organic produce to his truck and snacks on a freshly picked tomato. When he introduces Joni to the garden, he breaks open a green pepper and shares its fresh crunch with her. Later, Joni and girl friend dine in Paul’s restaurant, their plates filled with colorful vegetables. Of course, the Moms always serve their children healthy food. Breakfast is cereal and fruit. Dinner is salad and pasta and veggies. The only junk food I noticed was a bowl of potato chips served with salads and grilled hot dogs eaten outside in the sun during Paul’s first visit with the family. Meanwhile, Nic loves her red wine, for its anaesthetizing effect, yes, but also for health reasons. Joni and Laser have parents who care about them – constantly asking their kids, “Is there anything you want to talk about?” They have parents who listen to them, who fuss over them, who hug them, who feed them healthy food. Yes, the kids are all right and eating well too, and the film convinces me that Nic and Jules are great parents, but I could have used more focus on how the kids feel about their same-sex parents and how they are all right with that.
Posted by Richard Bellamy at 11:59 AM

Thoughtful review. I'm aggravated that quality films such as this one still have not reached the conservative southern netherlands where I live. I'm also surprised that Cholodenko manages to avoid sentimentality or Brady Bunch-esque schmaltz with this kind of story (no doubt the excellent actors help). Someone writing for Entertainment Weekly proclaimed that The Kids Are Alright is the best depiction of marriage in something like a decade. Do you agree?

FilmDr - Thanks, as always, for the response. Yeah, I read that ET review. It was effusive. I'm not feeling effusive about this film though I really enjoyed the acting. The best depiction of marriage? It's a good one. There are some very real moments - but it deals with more than just the marriage.

I have to say that Date NIght has some fine moments depicting marriage as well - such as when Carell observes that Fey has put in her teeth-guard for the night - so he knows there'll be no sex and he was expecting it. Then she takes out the guard, all slurpy with saliva, and says that she's willing. But, immediately, seeing the guard dripping with saliva, husband says, uh, that's okay - forget it. But she persists - it's okay - we can do a quickie. Uh, that's okay, he says. It's a classic moment - and the film does a great job of portraying the loss of glamour, romance, and excitement after many years of marriage.

Best depiction of marriage? The opening minutes of Up is another contender. Parenthood stands out in my mind - but I think there's another one I thought of a while back that I can't remember now, but that movie is more than a decade ago.

Not many effective depictions of marriage in any era, the couples being either too milquetoast or repulsive. "Away from Her," the Sarah Polley directed film with Julie Christie and Gordon Pinsent, is a pretty good one.

Craig - Yes, Away From Her is pretty good. I'm still trying to think of another one - somewhere in the recesses of my memory is one I've seen and thought accurate.

Nice review. (One-sentence spoiler warning:) As you suggested, I was amazed that a movie about a lesbian couple's children forming a relationship with their sperm donor "dad" could feel so cliche. And yet the film also rises above and beyond those cliche's to be truly affecting. There's something a little wrong, perhaps, about how the end of the film -- the most emotional part -- doesn't quite lineup with the rest, as if the film wanted to be cute and funny for the most part and then wow us with its emotional depth. It's a trick that was pulled off well by American Beauty (the film that's so unfairly slammed for its success now that I think a lot of people no longer remember what the film actually looks like), but it's a difficult trick to land.

I second your praise of Wasikowska, who, as I said in someone else's Alice in Wonderland review I have something of a soft spot for because she reminds me an awful lot of my high school girlfriend. That might give me some kind of strange bias. Beyond her, however, the film is Ruffalo's. He's terrific.

This is one of those movies that on the whole left me underwhelmed, even though it has about three great scenes in it an no truly terrible ones, even though I left with tear-stained cheeks. (That might have been slightly personal, too. I really felt for the moms dropping off their daughter at college and thought about how hard it must have been for my mom to drop off her only child at school and how brave she was at the time. But I digress.)

In case I don't get around to writing about this film, I wanted to say that I'm THRILLED that one of its clever subtleties isn't ruined through overt explanation: The name of Ruffalo's character's restaurant is "WYSIWYG." Pronounced "wizzy-wig," that's an acronym-turned-tech term for "what you see is what you get." It's genius, because it works as the name for an organic restaurant and as an indicator of Ruffalo's character. Thus it works within the narrative and symbolically. It's a clever touch, but it would have been ruined if at some point in the film someone had even mentioned the name of the restaurant. Better this way.

Thanks for the thoughtful comment, Jason. Interesting about the name of the restaurant. We agree here - because I enjoyed this movie but was underwhelmed as you were. And I agree that the ending seemed off-key somehow. When Paul looks in the window at Laser - that moment didn't quite work for me.