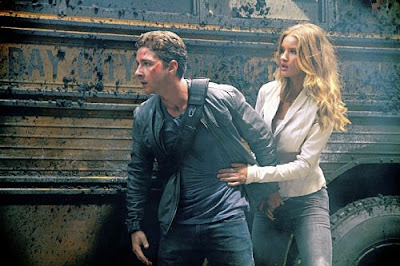 What’s with this Sam Witwicky (Shia LaBeouf)? In the first two Transformers adventures his girlfriend is the curvaceous hottie Mikaela, played by Megan Fox. In the third installment, Mikaela has left him, and his new girlfriend is Carly, played by super model Rosie Huntington-Whiteley. What makes Sam Witwicky a hot-chick magnet? His nerdy last name doesn’t keep them way. Being shorter than his girlfriends doesn’t keep them away. What gives? Perhaps, as his own mother so crudely suggests, it’s the size of his you-know-what.

Whatever the reason, Sam’s animal magnetism reels in this movie’s big vavoom factor! Mama! The human side of the story opens with Carly, dressed for work in a very short, very tight dress, waking up unemployed Sam by straddling him in bed. Then she puts on her spiked heels and clicks off to work. Throughout, Carly appears in each new sequence dressed in a different tight outfit that always includes spiked heels. She even has a chance to change into a skimpy top, tight jeans, and heels when she is captured by the bad humans, led by Dylan (Patrick Dempsey), who is aiding the Decepticon takeover of the world. Huntington-Whiteley's long legs and tight butt are shown in juxtaposition with those flashy pimped rides that transform into our hero bots. Dylan even says that the new Ferrari he purchased for Carly is the right car for her because both car and chick share the same sensual curves. Well, that's making it clear why Huntington-Whiteley is cast as Witwicky's girlfriend!

Of course, the film's kaboom factor comes from the many battles between the good Autobots and the bad Decepticons. This time around, the Decepticons are led by the traitorous Sentinel Prime (croaky voice by Leonard Nimoy), whose goal is to use a bunch of power pillars to form a teleportation bridge that will bring his planet, Cybertron, down to earth so that they can use the human race as a slave force to rebuild it.

As in the previous installment, this movie ends with a mega-long sequence in which human forces do battle against the bad bots, turning Chicago into rubble in the process. We get jet planes against Decepticon flying craft. We get special forces paratroopers and ground troops against the massive Shockwave, the anaconda of Decepticons, with a voracious maw and many burrowing tentacles. I rather enjoyed Shockwave, a nifty contribution to all things kaboom. 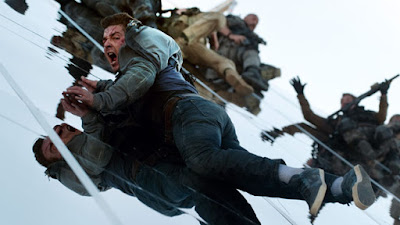 As all things impossible occur throughout the film, there's an element of good-guys-to-the-rescue fun that I enjoyed here, taking me back to many a Saturday afternoon matinee. All those standard ingredients are here. You think the good guys are dead. They're not. Sam and Carly are about to be killed. They're saved. It looks like Optimus Prime is down for good. He's up. It looks like Cybertron is going to double park next to the Trump Tower. It doesn't. That Dark of the Moon takes these predictable devices and creates suspense, or at least some jaw-dropping imagery, is something of an accomplishment.

Finally, we end with gratuitous schmaltz (O. P. swearing the Autobots will never desert humanity even though humanity kicked the Autobots out when the chips were down), blatant patriotism (tattered flag flying above the rubble of fallen buildings), and shallow sentimentality ("I love you's" exchanged by the unlikely couple, Sam and Carly).

But at a length of over two and a half hours, man, oh, man, this is way too much vavooming and kabooming even though I enjoyed some of the action in the Chicago battle. Yet throughout this very long and very noisy movie, the silliest element is the use of Huntington-Whiteley whose job is simply to look sexy. Well, she does her job, and why should I worry? We came to look, and she's just more to look at.
Posted by Richard Bellamy at 6:21 PM

Sam's mom straddles him in the morning? Am I reading that correctly?

You couldn't drag me to this film, but I enjoyed every word of this review. Nice work.