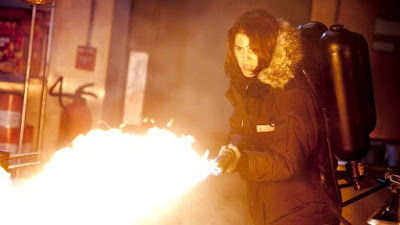 As a prequel to John Carpenter’s 1982 film, The Thing (2011) does a nice job of building some of the same tension as paranoid scientists in a small Antarctic outpost suspect each other of being infested by an alien life form found frozen in the ice, and all the running around and bursting with alien tentacles and incinerating said tentacles and monstrosities with flamethrowers (Why does an Antarctic research outpost have flamethrowers?) is done in a set that is a faithful replica of the one for the 1982 film. Meanwhile, Mary Elizabeth Winstead, as paleontologist Kate Llyod, does a very good job of showing fear in tight situations and emerging as the clever survivor, blazing away with her flamethrower like Ellen Ripley and wisely refusing to trust anyone. And even though the movie connects the dots niftily with the Carpenter film whose storyline it precedes, the end product provides only moderate chills and suspense, and it left me wondering why it essentially remakes the 1982 film when the storyline and premises of Howard Hawks’s 1951 film, The Thing from Another World, would have been much more interesting to revisit. 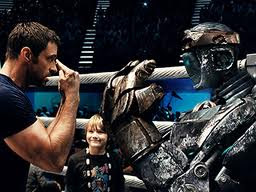 Family-friendly director Shawn Levy’s film Real Steel tugs at every emotional chord in a film whose performances are so over the top that you suspect there’s an overacting competition going on among the cast, but you eventually find yourself won over by the film’s touching core achieved by the relationship between bitter, wayward ex-boxer Charlie Kenton (Hugh Jackman), who drives all over the country, fixes up boxing robots, and fights them at fairs and carnivals, and Max (Dakota Goyo), his son he hasn’t seen since birth.

While most of the overacting is successfully done by Jackman as Charlie, the impetuous freelancer always trying to make a buck, and Kevin Durand as Ricky, the sleazy, upper-lipless promoter who hounds Charlie for money, Evangaline Lilly, as Bailey, the daughter of Charlie’s former trainer, offers some subtlety and sincerity as the attractive, mechanically minded love interest who believes in her man.

Though we don't see Charlie and Bailey do anything more than kiss, there is the touching moment when Charlie returns from a long trip, lies on the bed next to Bailey, and places his arm over her sleeping body. Very family-friendly, yes, but then Bailey is quite leggy and busty around the little eleven-year-old boy, and you can see why he takes to her immediately. 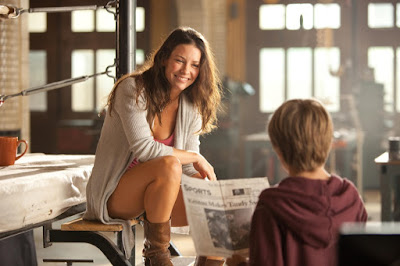 Though Dakota Goyo, as Charlie’s son, Max, might remind you of little Jake Lloyd as Anakin Skywalker, over-bubbling with campy golly-gee enthusiasm, Goyo makes Max a very believable, touching little hot dog as he does his pre-match dance numbers with Atom, his fighting robot, and exudes boyish bravado as he challenges the owners of Zeus, the World Robot Boxing champion, to a match. In addition, his earnest passion for training Atlas for the big fight leads to the inevitable father-son bonding scenes and elicits some emotional speeches from Jackman.

Real Steel is nothing much more than a comic book soap opera replete with glitzy robot boxing scenes calling to mind the histrionics of WWF matches and the requisite comic bookish adversaries: Tak Mashido (Karl Yune), Zeus’s anal Japanese designer, and Farra Lemcova (Olga Fonda), the tight-bodied Russian ice queen, but it doesn't leave you with an empty feeling. There is a warmth that lights up this standard story of the underdog going to the big match, achieved mostly by Goyo’s performance played opposite Atlas, that clanking collection of metallic parts who is doggedly determined to fight for the boy who loves him, and I like how director Levy takes time with lighting and cinematography to capture some idyllic images: Midwestern cornfields; roadside motels; and the open road taking father and son on their quest.
Posted by Richard Bellamy at 3:02 PM