“You are my Sunrise / My only Sunrise" 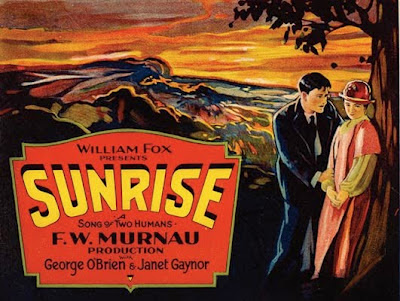 This is fucking great! vs. NOT EVERY GREAT MOVIE HAS TO BE AWESOME.

In a recent post at the Cooler: Sight and Soundless: How Cinephiles are Failing Cinema, Jason Bellamy states simply, A great movie is one that as you're watching it, and after, makes you think, "This is fucking great!" He goes on to exhort, We need to ditch this notion of over-praising movies we "respect," which is almost always code for "I didn't like it as much as I think I'm supposed to, but I'm not about to look like an idiot by saying so," and let our heart and our gut guide us. His statements here come in response to the Sight and Sound critics’ poll that supplanted Citizen Kane as #1 and included Sunrise, The Passion of Joan of Arc, and Rules of the Game in the top 10.

In a rebuttal post in The Front Row, David Brody of The New Yorker contends that NOT EVERY GREAT MOVIE HAS TO BE AWESOME. He goes on to say, One of the dangers for a critic in putting the pleasures at hand on the top of the heap is that of taking familiarity for primacy, of mistaking habit for merit and comfort for virtue—to take the conventions of our own times and milieux for the center of the universe.

I, however, have always believed that a great movie elicits the response, as you watch it and after you watch it, "This is fucking great." And I don't believe Bellamy is contending that the pleasures at hand necessarily provoke this response. I might consider movies like the Nic Cage disaster film Knowing and the sci-fi film Tron Legacy "fucking great," but they are not "fucking great" with a difference. They compel me to watch them repeatedly for certain satisfying elements, but they don't compel me significantly in regards to the ideas and emotions they evoke.

Murnau's 1927 silent classic has been used as an example of a film that critics might choose for a top 10 list because they feel they must in order not to appear ignorant. Oddly, I was compelled by this film BEFORE I saw it when I read about it in a book about the silent era. I loved the title, and I was fascinated by its simple paradigm, its fable-like story that the book summarized with a series of stills. I immediately went to amazon.com to buy a copy, but I discovered that it was not available in a new DVD. Much later, when it was re-released on DVD, I bought it and watched it twice. Again, love the title! Love the simple story and some of its stunning images. But I can't say I am greatly compelled by its overall effect. I can hum its praises but I can't sing them.

I disagree with Brody. I have always felt that a GREAT movie HAS TO BE AWESOME! Like Bellamy, I have always let my heart and gut be my guide when it comes to naming great movies. If I had been called upon to contribute to the Sight and Sound Greatest Films list, this would be my guide, and I’m afraid I wouldn’t choose Sunrise for the top 10. In way of providing a euphemism for Bellamy's declaration, "This is fucking great," I feel that a great movie is one that as you're watching it, and after, makes you think, "You compel me." You want to talk about it. You want to write about it. (Bellamy exhorts critics to write about those less-known films they consider great.) You want to sing its praises. "You are my __________, my only __________." Fill in the blanks yourself.

Posted by Richard Bellamy at 10:45 AM