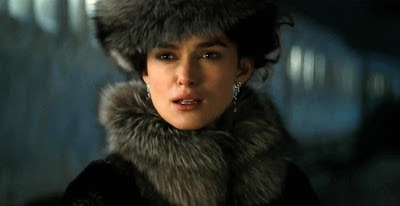 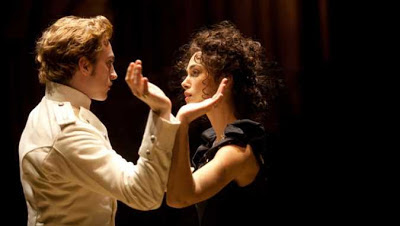 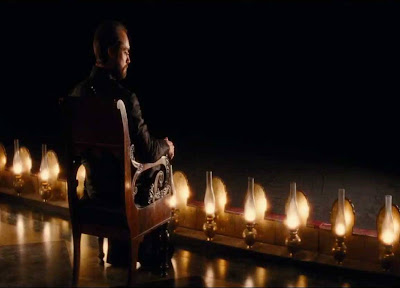 Shakespeare certainly liked to draw attention to his own stagecraft. O for a Muse of fire, that would ascend/ The brightest heaven of invention.” He saw the theater as an apt little world that paralleled everything going on in the larger world outside. All the world’s a stage/ And all the men and women merely players. The stage was always a useful metaphor. When we are born, we cry that we are come/ To this great stage of fools. Cleverly, he uses a play within a play to dramatize the conflicts in Hamlet. The play’s the thing/ Wherein I’ll catch the conscience of the King.

Nifty, but I wonder if Shakespeare’s critics got on his back for drawing too much attention to his own devices. Not likely. Nothing seems to get in the way of Shakespeare’s drama, which is not always true of Joe Wright’s staging of Anna Karenina, in which most of the scenes are enacted upon actual stages.

When Wright’s conceit works, it works well. In my favorite cut, Anna’s son plays with his trains on a huge diorama of a snowy countryside, and as the train (electric trains in the 1870s?) moves along the tracks, it becomes the train that Anna is riding on. Here, the train compartment is an obvious staging with windows painted with ice, but the toy train has established the scene’s realism. This is also a wonderful transition, and a nostalgic allusion to all those old films that employed model trains in place of real ones.

The staging of the grand ball as a scene in a play is initially thrilling, though it goes on for too long. We quickly get the smoldering passion between Anna (Keira Knightley) and Count Alexei Vronsky (Aaron Taylor-Johnson). They achieve a lot of that just with their eyes, and the ritualistic hand and arm movements quickly lose their effect. Less would have been more in this episode. More dramatically effective is the horse race in which the audience on one stage watches the horse race on another stage. When Vronsky’s horse falls from the track into the audience, It is transformed from a claustrophobic tableau into the film’s most shocking image.

At other times, especially in his manipulation of his extras, Wright lets his staging get in the way. At first, the strictly choreographed office workers stamping documents establish an ominous Kafkaesque bureaucracy, but when this goes on too long, the choreography becomes silly. Silly, too, is the servant who walks a full circle around Oblonsky (Matthew Mcfadyen) each time he hands him what he needs. Meaning can be construed in all of this, but at times I felt I wanted more of Anna and Vronsky, definitely more of Keira Knightley, whose talent for being radiant, desirable, and full of hot passion reminded me of Julie Christie in Doctor Zhivago, especially when Knightley wears the ubiquitous fur hat and collar all Russian beauties wear.

I was not always dazzled by Wright’s staging of Anna Karenina, but I enjoyed many moments. The story is slow to start – too much Oblonsky in the beginning – and the ending could have been more dramatic. The staging is interesting, though when Levin (Domhnall Gleeson) takes us out into the sprawling Russian countryside, I found myself wishing the film had employed more exteriors to counterbalance the claustrophobia of the interiors in which characters enact their dramas amidst backstage pulleys and props. To be fair, however, it is easy to see how the cluttered interiors are appropriate to a story about what goes on in the confines of urban Russian society as well as within the confines of Anna's heart.

In the film’s impressive final image, Levin’s rural Russia is framed as a backdrop on a stage in a theater sprouting wheat. I’m not sure what it means, but it’s a nice image. Perhaps it means that Levin’s Russia is the real Russia, and Russian high society is “a great stage of fools.” Similarly, Anna Karenina provides moments of drama and clever imagery, but some of this gets smothered by the confines of the device.
Posted by Richard Bellamy at 8:15 PM