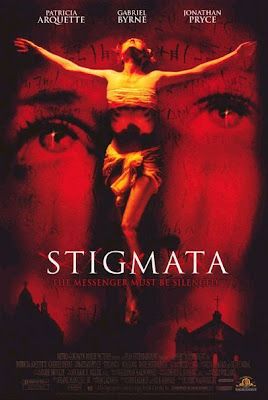 After reading about the new horror movie, Drag Me To Hell, at
The Cooler, The Film Doctor, Getafilm, TRACTOR FACTS, and other blogs, I got to pondering horror subgenres that I love and hate. (As for Drag Me To Hell, I enjoyed aspects of it but I wasn’t that enthusiastic about it.) I don’t care for the teen slasher subgrenre, and torture horror leaves me cold. Having been brought up strict Catholic and educated by nuns who told hair-raising stories that haunted my sleep, such as the one about Satan appearing in human form but with cloven hooves, I am fascinated and chilled by what I’ll call holy Catholic horror – The Exorcist being the classic. (When I read The Exorcist, I broke out in a cold sweat at the slightest thump in the night.) More recently, I enjoyed The Exorcism of Emily Rose. But my favorite holy Catholic horror movie is Rupert Wainwright’s Stigmata (1999).

While Stigmata is not as scary as The Exorcist, I love it for its slick cinematography, Patricia Arquette’s invested performance as the kinky Pittsburgh hairdresser-turned-saint, Frankie Paige, and the film’s striking use of imagery.

Like The Exorcist, it starts out in a foreign country. In this case, it’s a beautifully filmed sequence shot in a small town in Brazil where slow-motion images reveal the religious fervor that has arisen over the death of a priest, Father Almeida, and the subsequent miracles: the pigeons have returned (it’s never explained where they went) and the statue of Mary is bleeding real human blood – and it’s warm! This brings the Vatican’s miracle-investigating agent, Father Andrew Tiernan (Gabriel Byrne), to this location. Meanwhile, a tourist buys a rosary that happens to have belonged to Father Almeida and sends it as a souvenir to her daughter in Pittsburgh.

Cut to very rainy Pittsburgh where we meet Frankie Paige, the very non-religious hairdresser who goes to a loud punk rock nightclub decorated with chain-link fences, does shots of tequila, and enjoys a one-night stand. When she starts manifesting the stigmatic wounds, Father Tiernan is sent to investigate, and he eventually reveals a plot to suppress an Aramaic scroll translated by Almeida – a gospel in Jesus’s own words that is a big threat to the Catholic Church (sound familiar?) because it suggests that Jesus didn’t encourage organized religion. Holy cover-up! And who better to lead the cover-up than the icy Jonathan Pryce as Cardinal Houseman, who might go so far as to kill Frankie, the innocent messenger possessed by Almeida’s angry ghost. Ironically, Almeida has chosen a sinner to manifest the sacred stigmata usually suffered by someone who is deeply religious. 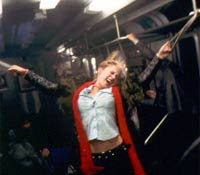 Granted, with all the whippings and bloody wounds inflicted upon Frankie, the film borders on the sadomasochistic. Granted, too, the film borrows elements of The Exorcist that have become clichés: the possessed person, eyes rolling into the back of the head, spouting profanities in a deep demonic voice; the levitating bed; the invisible force throwing priests around the room. But the cinematography and the stunning imagery it captures make up for any shortcomings. 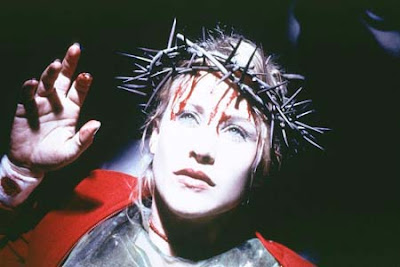 My favorite moment comes at the end of the Brazilian sequence. We see Almeida in his coffin; a mirage of swirling blood begins to cover his face. The voiceover reciting the “Hail, Mary” introduces the irreverently raucous song "Mary Mary," by Chumbawamba. no virgin me, for I have sinned. i sold my soul for sex and gin. go call a priest, all meek and mild. and tell him "mary is no more a child" Then we shift to fast-cut aerial shots of the city and Frankie Paige strutting down the mean streets of Pittsburgh intercut with shots of lurid religious artwork.

Throughout the film, the camera plays with the recurrent images of water (salvation) – shots of falling water droplets played in reverse and frequent shots of rain; candles (the light of God) – ranks of candles in the church and Frankie’s apartment; flowers (sanctity) – dense displays of flowers in a market where Frankie suffers the piercing of her feet; fire (sin) - the flames roiling around Frankie's bed; and pigeons and doves (the Holy Spirit) – the dove flapping frantically in Frankie’s apartment just before she gets the wounds to her wrists. Religious imagery abounds, especially in the fast-cut montages paralleling the tortured Frankie with images of the crucified Jesus. 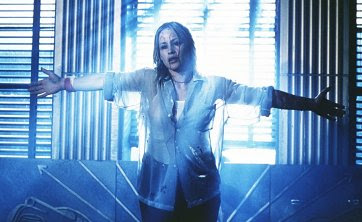 Besides acknowledging the film's visual excitement, you could call Stigmata a deeply religious film. The Catholic Church might call it something else entirely. Actually, back in the 60s, the Catholic Legion of Decency, dedicated to "the purification of the cinema," would call it "condemned." Ah, the movies I love to see are such a rebellion against my upbringing!

Posted by Richard Bellamy at 7:16 PM

Nice review. Perhaps I've seen Angels and Demons too recently to appreciate Stigmata as you did, but Catholicism beats out Protestantism every time when it comes to fun imagery. What did you think of Madonna's stigmata in her "Like a Prayer" video? I just saw The Wrestler and was struck by its references to The Passion of the Christ and the hint of a crucifixion at the end.

Thanks for the thoughts, FilmDr. Haven't seen the Passion of Madonna, but I liked the references to The Passion in The Wrestler.

As for Catholic imagery - even though I've strayed, I have to admit that any religion that believes in hell, devils, demonic possession, exorcism, saints, miracles, stigmata, and bleeding communion hosts has got to be the one true religion (or, at least, has to the best religion for Hollywood movies).

An interesting post might be the whole history of Catholic Hollywood films: Going My Way, Boys' Town, The Song of Bernadette. There are so many!

Just caught up with this review. Never seen the movie, but I can see its allure.

Yes, it does have an allure. It borrows many of the stock scenarios of the religious horror genre, but it's still a lot of fun to watch.

My wife digs this film but it never wowed me all that much. Altho, Patricia Arquette is certainly not too hard on the eyes.

Actually, I probably should watch this again. It's been several years and it's time to watch it again with a fresh perspective.

J.D. - Thanks for visiting and thanks for the comment. You're right, Arquette is pleasant to watch; she's perfect for this role. Meanwhile, the film is full of some memorable imagery.

Again, I really enjoyed your review of Days of Heaven. I tend to enjoy most films that are mostly exteriors and that incorporate memorable imagery.