The Imagery of Up 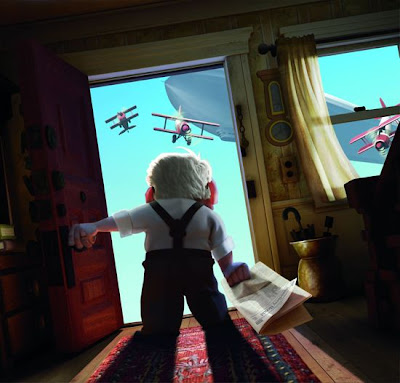 In one scene, Carl Fredricksen ( voice by Ed Asner), accompanied by the intrepid but innocent Wilderness Explorer, Russell ( voice by Jordan Nagai), drift into a very frightening lightning storm, and as the house is rocked by the tempest, Carl runs around trying to save his possessions from being smashed – his old furniture and knick-knacks that remind him of his marriage to his soul-mate, Ellie. The scene is masterfully painted, as every scene is in this new computer-animated feature. Most importantly, the scene points out that Carl needs to let go of the past or he will miss the wonder of the days he has left in the present. As in the image above, his old ways are constantly threatened.

The theme of letting go of the past develops toward its climax when Carl throws out all his possessions in order to lighten the load so that he can fly to the rescue of a boy named Russell, a rare giant bird, and Dug, a faithful dog, equipped with a collar that allows him to articulate exactly the kinds of things you would expect from a dog, so that he can deliver them from the clutches of the maniacal explorer Charles Muntz.

But the film's major strength is its imagery. In the same way the 2008 hit, WALL-E, uses pictures to establish the world and character of WALL-E, Up starts with a nearly dialogue-free episode in which little Carl, an adventurous boy brought up on the travel documentaries of explorer Charles Muntz (voice by Christopher Plummer), meets Ellie, an energetic little tomboy who also has a passion for adventure. Then, without dialogue, a montage takes us through Carl and Ellie’s relationship: they grow up, they get married, they dream of going on an adventure to South America, their dreams are thwarted by the realities of life, and Ellie’s health declines. Suddenly we come to abrupt silence. We see Carl sitting in a funeral home and we know Ellie has died. Now Carl is a recluse in his old wooden house, which he refuses to sell to developers who build a constricting canyon of skyscrapers around him. Wow! This is serious stuff.

Up is a very good film. It provides laugh-out-loud humor: Russell’s struggle erecting a tent is hilarious. It provides plenty of action, much of it including vertigo-inducing thrills in the air accompanied by an exuberant musical theme reminiscent of the Raiders of the Lost Ark March. Additional comedy derives from the antics of Dig, but Muntz’s pack of jabbering henchdogs grows wearisome rather quickly.

Up gives us things to think about and laugh at, but its most memorable strength is its imagery - as seen in the images below. 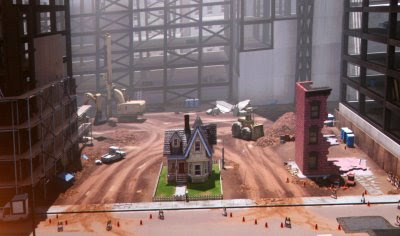 Carl’s little house symbolizes his unwillingness to let go of the past. New buildings create a constraining canyon around him. This is no place for a frail structure of wood. 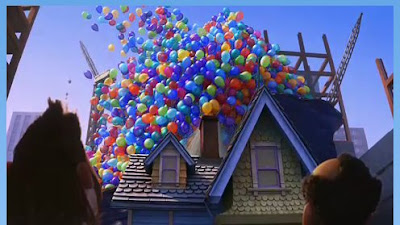 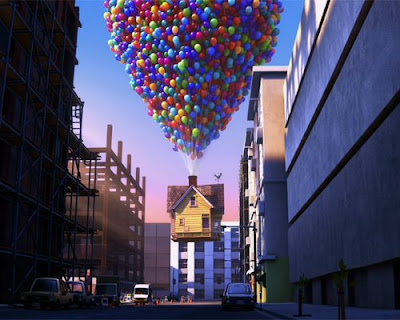 The colorful balloons suggest life and a vibrant hope. Perhaps Carl can fulfill a dream once thwarted by life’s constant exigencies. 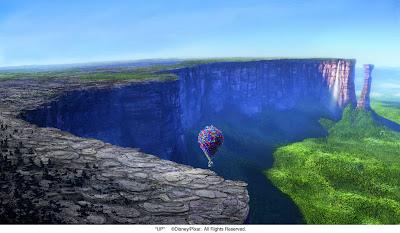 Plateau, rock spire, waterfall, and jungle constitute a minimalist little world patterned closely after Arthur Conan Doyle’s The Lost World. In the novel, the explorers find it impossible to scale the sheer sides of the plateau. They must climb a solitary spire of rock at the top of which they fell a tree to create a bridge to the lost world. 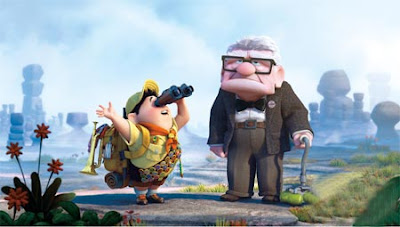 We see Russell's innocence in contrast with Carl's glum Weltschmerz. 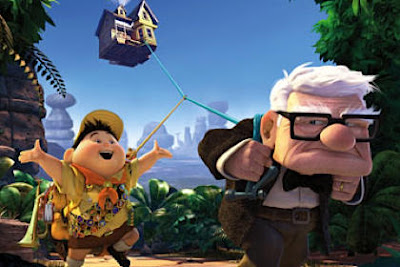 The floating house becomes a burden that Carl must bear. Russell originally came to Carl’s doorstep in order to earn his last merit badge by helping an elderly person cross the street or something. 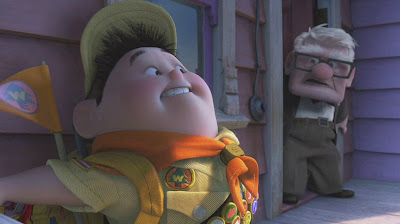 He never thought he’d have to help an old man pull a floating house. 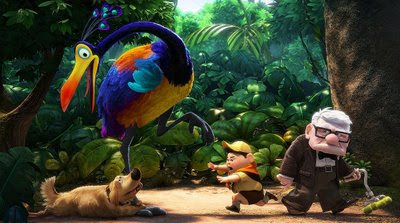 A variety of shapes and colors makes up this motley crew of heroes. 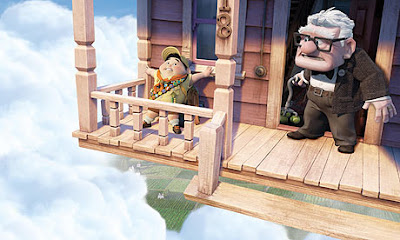 Whether you're growing up or growing old, life's a risky thing.

Posted by Richard Bellamy at 11:21 PM

Great study of this, and man, just looking at those stills is fun. So much beautiful light, color, detail - I feel like I could have watched the movie on mute and just admired the imagery you describe.

Right. Thanks for the comment! By being much more minimalist than WALL-E or Ratatouille, the images in Up almost have a surrealistic quality to them that I really liked. My mind wandered a little during some of the scenes involving the dogs (the dogfight had potential but its drama was muted somehow), but there was always something to look at.

Nice job, Hokahey. You are right about the brilliance of the graphics. I think my main problem with the film mostly boiled down to questions of plot and structure. Up moves from realism to fantasy (and back again at the end), and I ultimately prefer Carl's home with its weary mise en scene to any resplendent fantasy jungle. With the decision to make an old man the center of the film, Pixar chose to break new ground, but they opt for a safer route when things shift to Madagascar-esque exoticism.

Thanks for the comment. You're right that the plot shifts from realistic and poignant to surrealistic and adventurous. But Carl and Russell come back home. The house is left in the exotic world. They are back in reality, eating ice cream on the curb - but with the suggestion that that means back to the realities of life.

Funny you should mention plot and structure because I think plot and structure are tighter here than in WALL-E but I liked that film much better. I've been trying to articulate why I like it better - but I've been having trouble - so I left that out of my review. But I think it has something to do with the depth, texture, and unifying force of the character of WALL-E.

Like both of you, I also began to tune out of a little bit when they got into the heart of the jungle. I think the appearance of the dog was really the turning point, then amplified by the confrontation with Muntz. But it found its way back at the end and, of course, it was always nice to look at.

Yes, it was always pleasing visually. FilmDr remarked that he liked the "weary" mise en scene of the house better than the jungle world. I really liked the image of the house lost in the midst of the high-rise buildings.

Similarly, I liked the earthbound mise en scene of WALL-E much better than the busier and more colorful images aboard the big spaceship. In comparison with the spaceship world, the jungle world in Up is almost minimalist so I enjoyed that.