My Favorite Movie Period and Place

Over at Getafilm Daniel Getahun has initiated a fun meme to
name your favorite movie period and place, and, I thought, this is right up my alley because I love films that have a strong sense of place with meticulous art direction that takes you back in time or into the future or into a world that has never existed.

I realized it would be very hard to pick just one place, but I wanted to pick just one. Otherwise I’d have to list just about all the movies I love. In addition, I can think of all sorts of places in films that are wonderfully evoked, but I wouldn’t necessarily want to spend much time there. The Five Points section of old New York is vividly represented in Gangs of New York, but I don’t think I’d come out of there alive.

Anyway, here it is –

When I first saw this film, the opening scenes of the three Ludlow brothers, Alfred (Aidan Quinn), Tristan (Brad Pitt), and Samuel (Henry Thomas), running through the woods and pretending to be Indians in the wilderness near the log ranch built by their father, William Ludlow (Anthony Hopkins), really choked me up. It reminded me of family camping vacations in the great National Parks of the West and of my two brothers and me running through the woods, pretending to be Indians.

Because of those vacations and my deep love of Westerns, the Ludlow ranch and the land around it struck me as the most idyllic place to live: in that huge log house, next to that river, with those massive mountains rearing up in the distance. Besides being beautiful, this is a place that is haunted by my favorite episodes in American history. Here plains tribes like the Cheyenne and Lakota lived a life guided by ritual. This was their spirit land that they fought for against the encroaching whites. (The novella by Jim Harrison mentions that Ludlow despised Custer and celebrated when he learned that Custer had been killed at the Little Bighorn.) “Hokahey!” William Ludlow fought to allow the Indians to keep their land. When that failed, he escaped the madness and built this sanctuary far from the negative effects of civilization.

This place is so lucidly depicted that it sucks you in. I can smell the grass and the wood smoke and the horses. The huge house is a real place. I love the dining room where the brothers throw dinner rolls at each other. The meat looks delicious. I love the living room where William reads Rikki-Tikki-Tavi by the fireplace. Who wouldn’t want to have Anthony Hopkins as a father? Ludlow is English; so was my father, and he looked somewhat like Anthony Hopkins and combed his hair exactly like Hopkins does in the film.

I love the bedrooms. You can smell the wood and the fresh linens. I’d love to share one of those rooms with Julia Ormond. Outside, I’d love the play games and have picnics in the grass and shoot Winchesters at targets and practice roping cows and get lassoed by Julia Ormond.

Some settings are flat and merely representational. This place has depth. The magnificent cinematography of John Toll makes the mountains feel so close. James Horner’s musical score suggests the epic nature of this story and place. The ranch and the land around it constitute a very real place where I would love to live. 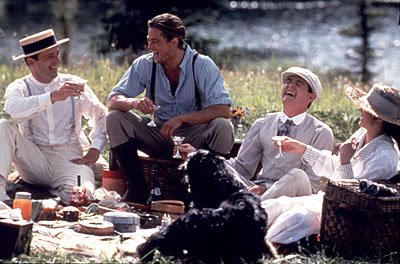 Posted by Richard Bellamy at 10:25 PM

You'd probably love this place that I stayed at about a year ago. I'm in Phoenix, so any chance to get out of the heat of the desert (and close by) is welcomed. There's a place in Alpine, AZ near the NM border called Hannagan Meadow. In August, it was practically snowing (odd enough for AZ), but when it wasn't, it was this gorgeous meadow with the lodge and cabins across the street. It even has a pretty real cowboy (that runs the place with his wife) that could pass for one of the Legends characters. Cool place (see more here if you want).

Good choice. Made me immediately think of Tony Hopkins scrolling on his chalkboard and saying "Happy now!" to Brad Pitt...

The Ludlow Ranch is a great pick for this meme. That montage where it shows the family playing tennis, shooting guns and roping critters -- turning everything into a game -- is a simple and effective way of showing how folks who get-away-from-it-all tend to come close together; they become one another's entertainment and companionship. Wonderful scene in a wonderful movie.

Jason - Thanks for the comment. As for Julia, her playing the visitor to the ranch allows us to visit from her point of view - and the montage does make it seem like such a fun place.

Fletch - Thanks. Hannagan Meadow sounds like a great place. Last summer I did a road trip in Montana and Wyoming. Heading to Yellowstone, my younger brother and I stayed at a place called Crossed Sabres Ranch and the proprietor was a dude just like the one you describe. He wore cowboy attire everyday - with leather vest and chaps - and he had a waxed moustache that stuck out to the sides. He would visit at breakfast and chat about the old days.

With all those sequels and superhero movies out there - we need more Westerns!

I am moved, Hokahey - thank you for sharing this! What a tribute to both your life experience and your connection to this movie. I've even learned the source of your name.

Did you ever seen An Unfinished Life? I don't know why that movie came to me as you were describing this, but it's another ranch scene I remember from a recent movie, and one that really made me want to visit such a spot.

Thanks again for participating in this - you really got to the heart of what I was hoping for. I figured we didn't all watch so many movies without feeling some desire to enter into them...

Thanks for the feedback, Daniel. I appreciate it. I really enjoyed doing this. (It even led to an exchange with Fletch of vacation ranches in Arizona and Wyoming.) Now I'm lined up to re-watch Legends of the Fall some night soon.

I remember seeing the preview for An Unfinished Life - and then the movie came and went. I'll have to check it out.

For a translation of "Hokahey" - see my Profile.

Hokahey - yep, looks and sounds like the same kind of place, though the Hannagan Meadow Lodge (unfortunately) isn't too much of a dude ranch. You can take horse rides and wander into the gorgeous landscapes, but there weren't a lot of events of anything else going on.

Though, when I was a kid, we stayed at a place in New Mexico called the Broken Drum Ranch that had all kinds of stuff like that. Good times. Those places make for a great getaway from cell phones and traffic and annoying people and...

Yes, I know what you mean about getting away. If you ever get up Wyoming way, check out the Crossed Sabres. They have all sorts of day and overnight horseback riding excursions and, as I said, the proprietor, Ray McCoy, is a real old-timer.

As for getting away, I'm heading out there again in July to Montana, Wyoming, and Nebraska, and I don't bring a laptop, my cell phone doesn't work out there - so I plan to take a break from the Net.