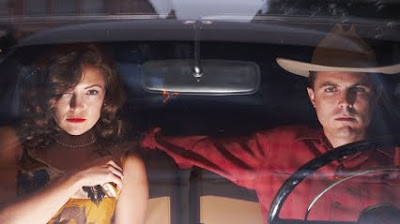 Considered “one of the most blistering and uncompromising novels” after its publication in 1952, Jim Thompson’s The Killer Inside Me was made into a movie in 1976, and its grim story narrated by Lou Ford, a psychotic Texas sheriff turned killer, compelled directors such as Quentin Tarantino and Andrew Dominick to try to adapt the novel again, casting performers such as Marlon Brando, Tom Cruise, Brad Pitt, and Leonardo DiCaprio in the role of Lou Ford, and Marilyn Monroe, Juliette Lewis, Drew Barrymore, and Maggie Gyllenhaal in the role of Joyce Lakeland, the attractive prostitute whom Lou abuses and uses to pin a murder on the son of an oil tycoon and make off with bribe money.

“Blood will have blood,” as the Bard wisely put it. It’s the age-old sordid story, and in The Killer Inside Me, written by John Curran and directed by Michael Winterbottom, that’s the fix Sheriff Ford (Casey Affleck) finds himself in after beating Joyce (Jessica Alba) to a pulp and making it look like she shot Elmer Conway (Jay R. Ferguson), son of oil man Chester Conway (Ned Beatty), the man Lou blames for the death of his older brother. Just like Macbeth, Lou Ford will have to kill again… and again.

Following the cold machinations of a psychotic killer’s mind has potential for making a compelling story. But while Casey Affleck does a great job of showing Lou’s twisted brutality paired with a seemingly slow-witted obliviousness, the script fails to engage us deeply enough in “the killer inside” him. Affleck is admirably supported by Jessica Alba as Joyce Lakeland, and Kate Hudson, as Amy Stanton, Lou’s girl-next-door “fiancé” who endures rough sex in the hopes of leaving a Texas nowhere town, shows that she has talent that deserves more opportunities on screen.

The film’s vivid depiction of the town – with its vacant streets and austere diners – and the establishment of a rich 1950s atmosphere and an American noir mise-en-scène are the film’s major strengths. But the fine acting, the artistic cinematography, and the meticulous attention to the look of this film are not enough to make up for the failing of the script to turn Lou’s character, with his psychotic behavior, into the driving force of a gripping story. The film presents protracted scenes of gruesome violence. Though the effect of the violence is initially repelling, it is ultimately numbing, and as the story strays, too long, into predictability and silliness, and beyond believability, it left this viewer wondering whether or not this adaptation of the novel was worth the effort.
Posted by Richard Bellamy at 10:00 AM