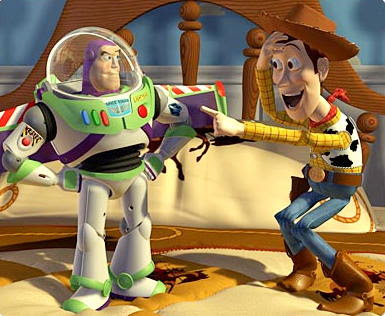 Once it gets past the requisite jokes and puns on toys started by the first two films, Toy Story 3 becomes an intelligent, imaginative movie. It is also a very serious movie about the bittersweet nature of growing up and the abandonment of toys to oblivion. I mean, how do toys feel when they get forgotten and thrown out or stashed in the attic? Woody (Tom Hanks) and friends definitely feel hopeless when they end up in Sunnyside, the ironically named day care center from hell. At first, they get relegated to the playroom with kids who abuse the toys in a ghastly frenzy – one of the most frightening scenes in one heck of a scary kids movie. We are told this is the room where the littler kids play, while the older kids play tranquilly in the next room. But the roomful of “littler kids” sure looked to me like the segregation of a bunch of kids with ADHD, so I found the scene unsettling if not distasteful.

The fright goes on as the movie reconstructs classic elements of the prison genre with meticulous, clever detail. Think Woody goes to Shawshank! Ned Beatty voices a soft and cuddly but sinister strawberry-scented bear called Lotso who employs a very frightening cymbal-clanging monkey for surveillance and beats up a toy phone for spilling the beans to Woody and his friends. Every detail is here – the lock-down; the spotlights; the guards; the perilous escape – and the violence, too. Buzz Lightyear (Tim Allen) provides comic relief when his mechanics go haywire and he courts Jessie (Joan Cusack) like a Spanish flamenco dancer, but this is hardly enough to lighten up the tension and seriousness of the prison sequences.

Along with the frights, Toy Story 3 is a very deeply touching movie that richly establishes the bond between our motley crew of toys we have gotten to know in two previous movies. The film climaxes with a gut-wrenching, tear-inducing scene in which the toys slide toward fiery obliteration – a scene that’s so seriously evoked you might find yourself thinking of something as grave as the Holocaust. The film’s happy/sad resolution, in which college-bound Andy leaves his toys with a toy-loving little girl named Bonnie, is one of the best-staged scenes in any film I’ve viewed this year. Who says CGI characters aren’t real? Pixar’s computer-drawn characters work some real magic here.
Posted by Richard Bellamy at 10:14 AM

Wow, I leave for a bit and come back to facelifts on every blog! I think we all started to discover the new Blogger templates around the same time. Nice work on yours...

Seriously! In hindsight what is so shocking about the CGI in Toy Story 3, at least to me, is that it works magic on multiple levels. It brings to life not only animated characters, but animated characters that are based on inanimate real-life objects. Pretty bizarre when you think about it.

Daniel - glad you're back! Actually, I never noticed the new templates until Jason of the Cooler pointed them out and helped me with the pictures. I had always wanted some stills up there but I never had the time.

As for Toy Story, Pixar is magical. If I tried to find something to be negative about, I'd have to say their short cartoons sort of leave me cold - this one - "Night and Day" - and last year's cartoon that preceded WALL-E. The only one I've really liked is the one that precedes Ratatouille - with the alien mentor teaching the little alien how to lift Earthlings out of their beds.

"Night and Day" warmed on me at about the 2/3 point, but it definitely took it's time to get going. By the end of it I was head over heels, especially with the piped in speech by...(I really should know)...?

Daniel - thanks - yes, "Night and Day" was a clever experiment in editing - just not as much fun as a Chip and Dale cartoon or something frivolous like that. And, even though I don't always love the Pixar pre-show cartoons, they are a nice bonus.