The Twilight Saga: Eclipse and The Last Airbender 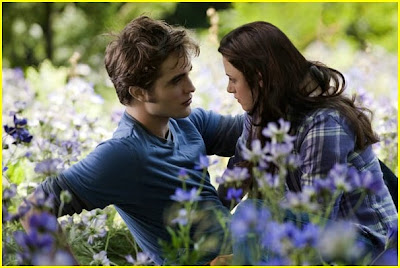 (This is the last in a series of four posts that review five movies I saw over a period of six days last week.)

The Twilight Saga: Eclipse the latest chapter in the perils and dilemmas of Bella Swan (Kristen Stewart), is the best of the lot so far – a well-acted, expeditiously-directed love story full of suspense, and, oh, yeah, vampires and werewolves. There's some nifty cinematography as well, especially in the opening scene when a drifter gets slashed by a vampire (is it Victoria?) and ends up writhing in pain in a driving downpour.

David Slade employs bountiful close-ups to elicit an intimacy and a sincerity from the performers that has been somewhat lacking in the previous films – and this helps carry us through Bella’s silly dilemma between Jacob (Taylor Lautner) and Edward (Robert Pattinson) – when we know all along that Edward is the one. Somehow, Bella’s big dark eyes are more expressive of her mopey indecision, Jacob’s passion for Bella comes off as quite powerful, and even Edward gets a chance to crack a smile.

In addition, there’s more of a story here. It’s not just Bella torn between – or being tugged between Jacob and Edward. We get the evil, vengeful Victoria (Bryce Dallas Howard) raising a pack of newborn vamps (who are especially blood-thirsty in the first months after being transformed) to destroy the Cullens and kill Bella. Ashley Greene, as Alice, is especially engaging, buttering up Bella’s dad with a little flirtation, and showing her awesome speed during a training session in preparation for the big battle.

Meanwhile, Rosalie (Nikki Reed) gets to tell her compelling backstory – an early 1900s set piece involving a fiancé who turns into a cad. In his backstory, Jasper (Jackson Rathbone) takes us back to Civil War era Texas where he has a run-in with vampire seductresses. Ya-hoo! Ride ‘em, Johnny Reb! I enjoyed the flashbacks as interesting contrasts to the rainy, snowy woods of the Forks area.

The action is fun; I love how vampires are so fast and so strong. But the werewolves are like CGI rejects from The Lion, The Witch, and The Wardrobe, and I wish they’d wear name tags because there’s no way to tell them apart when the buff, shirtless Native American guys shift into werewolf mode. 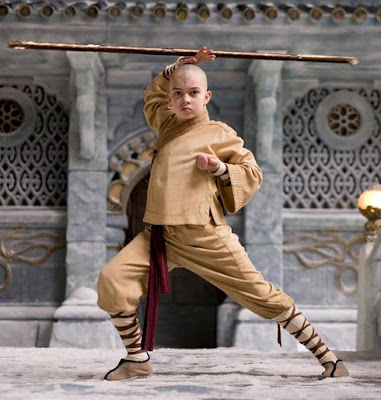 M. Night Shyamalan’s The Last Airbender, a plodding conglomeration of disconnected elements from science-fiction, fantasy, and Oriental martial-arts films, fails to develop engaging settings, interesting creatures, mesmerizing martial arts, or compelling conflicts, and the duration of the film provides too many dull gaps in which I wondered how anyone could have viewed cuts of this film with any sort of feelings of accomplishment, ignoring the weak story, poor pacing, ponderous editing, and stilted acting that constitute this silly movie about Aang the Avatar: the Last Airbender; the Fire Nation led by Lord Ozai who wants to destroy him; the Waterbenders of the Southern Water Tribe who want to help him; a spectral dragon who guides Aang; a flying creature that looks like a stuffed animal cross between a pug-faced puppy and a beaver; and two glowing koi that bring disaster if one of them is killed – indeed, a mishmash of odd elements that never coalesce into a cinematic little world that engages us to any worthwhile degree.
Posted by Richard Bellamy at 9:00 AM

"– when we know all along that Edward is the one."
So Very True. I love this!

paula - Thanks so much for your comment! I know you must have loved this movie! How many times have you seen it so far? What parts did you like the best?

I've seen it only three times so far...I'm kind of embarrassed but I'm trying to pencil in Inception and TS3 into my movie schedule too. Eclipse was phenomenal, the best of them so far. The acting was better, the like script was better...seriously mind blowing. I'm glad Jacob looks the way he does in the last scene, totally puts things in the right light for the next movie(s).

Mr. Bellamy, I was so ecstatic to get your postcard!! I'm so happy you liked Eclipse, I definitely agree with you it was the best of the three. I was a little skeptical at first with a new Victoria, but I believe Bryce Dallas Howard did her justice. I think there was a great balance of the action and the love story...in the book there isn't much focus on the real story of the fight. I've only seen it three times so far, but Paula and I will definitely be seeing it much more! -Meghan

Thanks so much for your comments. Sounds like you're having a great movie summer. It really was the best Twilight - tighter in every way!

I really like Bryce Dallas Howard from The Village so I'm glad she got this part. However, I thought Dakota Fanning was great in the second movie but dull here.

See Inception. Even if you're not crazy about it, it's a fun movie to discuss. Then you can read my post above. I had to see it twice to fully understand it, so don't feel bad if you're lost.

Definitely see Toy Story 3. It's so touching! And if it comes to the Nickelodeon, see Winter's Bone - the best movie I've seen all year. (And it's been a bad year for movies, so I was glad Eclipse was good!)

I'll probably see Salt this weekend, but action movies like that are so "ho-hum!" No passion!

Have a great summer!

No , I agree that Bryce was fine but I think Rachelle would have done a better job. As for my favorite scenes - Edward's proposal scene (even though it wasn't exact to the book) and the practice fight scene where Jasper is teaching everyone. I'm waiting to see Inception in imax and then Toy Story 3 whenever is convenient. I don't think Salt looks good, I bet there will be some corny twist involving twin sisters or something.

paula - Ah, Salt's twin sister! What a good call! I'll be thinking of that.

Usually I find "training" montages boring. Team has to get ready for the big game so we get a montage of their training, with a little comic relief thrown in. But I mentioned in my post that I liked this training montage - especially with Alice's swift moves. She's a great character.

So, I guess The Twilight Saga is going the Harry Potter route and making the last book into two parts. How do you feel about that? It's kind of frustrating in a way since the first part is usually just build up for the second part.