The Conspirator, Water for Elephants, and The Way Back (2010) 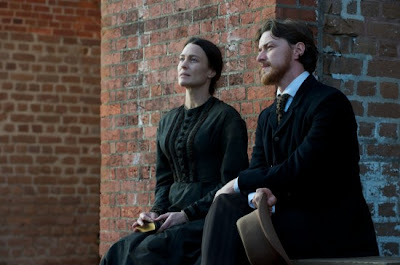 After a silly, unconvincing scene in which wounded Captain Frederick Aiken (James McAvoy) distracts his painfully wounded comrade (Justin Long) by cracking jokes, and an ineffective depiction of the assassination of Lincoln that feels like it’s merely going through the motions to get the movie started, a dullness that is rescued by a dramatic rendition of the panic on Tenth Street as the wounded Lincoln is carried across to the Petersen House, Robert Redford’s The Conspirator settles into a mostly interesting, often touching story as James McAvoy plays Frederick Aiken, the underdog lawyer crusading for justice as he defends conspirator Mary Surratt.

Robin Wright skillfully portrays Mary Surratt as a thin, gray-faced woman tormented by hopelessness. Along with Wright, Even Rachel Wood as Mary’s daughter, Anna, offers the best, most invested acting. Meanwhile, Kevin Kline as Secretary of War Edwin Stanton is suitably grim and merciless, reminding us that the Dick Cheneys of the world are not restricted to our time period.

Despite its made-for-television formula and its Civil War era stiffness, the movie grows more engrossing as Aiken pumps up his ardent campaign to defy the court’s determination to hang four conspirators as swiftly as possible by proving that John Surratt, Mary’s son, not Mary, knew about the treasonous chatter going on in the boardinghouse. After running into numerous legal dead ends, Aiken's efforts culminate with a nicely done moment in which Aiken argues constitutionality with Lincoln’s friend, a Supreme Court Justice (John Cullum), for a writ of habeas corpus.

With the bad guys played by the grim-faced Yankees who want vengeful closure for the tragic cap on four years of bitter tragedy at the hands of the hated Southerners, there is much old-fashioned courtroom drama to be had. But it’s hard to be transported into this event in history when the writing bombards you with phrases regarding the present state of fear, the need for vengeance, mistreatment of prisoners, prejudice against a hated enemy that has caused a national disaster, and legal gray areas that clearly seem to have a political agenda rooted in the present. 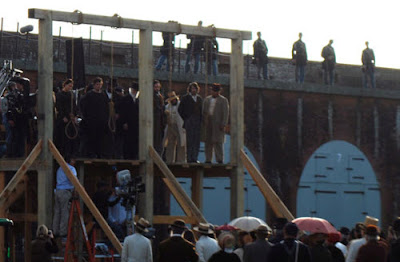 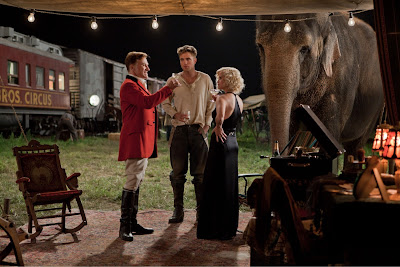 In Water for Elephants, colorful camerawork and a James Newton Howard musical score that borrows heavily from To Kill a Mockingbird and The Curious Case of Benjamin Button conjure a romantic, nostalgic picture of a Depression-era circus as seen through the eyes of a young man named Jacob (Robert Pattinson), an orphaned Polish immigrant who is hired to train a circus elephant and becomes enmeshed in the precarious relationship between the attractive circus star Marlena (Reese Witherspoon) and her sadistic ringmaster husband, August, suitably played by Christoph Walz who taps into his Hans Landa reservoir for much of his performance as the villain.

Though Walz’s is a compelling performance, despite much overacting, you could close your eyes and swear you were sitting in a showing of Basterds. Open your eyes on one of the numerous close-ups of August’s profile, and you’d swear director Francis Lawrence was imitating shots from Tarantino’s film.

But there are some very entertaining moments in this film, and it does a nice job of contrasting the superficial glamor of the circus against its sordid and shabby underside. Water for Elephants is contrived, melodramatic, predictable, and nicely pat, factors that must have made the novel a bestseller. But the movie is often beautifully filmed, genuinely funny and warm-hearted at times, and full of action. Like the kind of movie produced in great numbers in the 1930s, it is deliberately stocked with enough enjoyable ingredients to make it a worthwhile experience.

But why, oh, why does Old Jacob have to tell his story as a flashback, with Hal Holbrook as the sentimental old fellow elegiacally recounting his painful past in the style of Saving Private Ryan? There is nothing of the young Jacob in Holbrook’s doughy round cheeks; nothing of him in his moist eyes. Holbrook reveals not the slightest bit of hardness to suggest that he suffered the losses nor lived the life he recounts. In addition, the sniffly sadness with which he begins his account seems to belie how nicely it all turned out for him in the end. 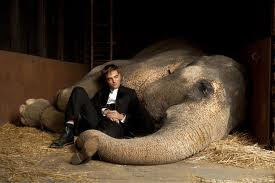 The Way Back, Peter Weir’s ultimately spectacular and touching outdoor adventure about a band of Stalin-era gulag-escapees who hike from Siberia, across Mongolia and the Himalayas, to India, takes some time to find its stride. 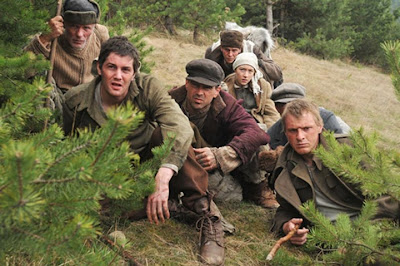 Although the Siberian gulag sequences are appropriately dark and effectively suggestive of squalor, cold, and misery, due to meticulous art direction and real snow, these opening parts are disorienting and claustrophobic, and it’s hard to focus on the central characters as a mixture of Russian, English, and English subtitles, as well as muttered nearly, inaudible dialogue, makes it hard to follow what’s being said. Then, suddenly and not very dramatically, the escapees are running through the dense forest; we never see them leave their barracks and cut through the wire.

Once the escapees start traipsing across the wilderness, however, and the characters are isolated in the Siberian vastness, we have a chance to distinguish faces as the performers touchingly establish their personalities. Jim Sturgess plays Janusz, the young Polish leader of the group who is determined to walk all the way to Poland to tell his wife he forgives her for submitting to torture and informing on him. Ed Harris is Mr. Smith, the American engineer, a sturdy survivor. Meanwhile, Dragos Bucur is the jokester Zorca, Gustaf Skarsgard is the capable cook, Voss, and Alexandru Potocean plays Tomasz, the artist, who documents their ordeal with sketches on scraps of paper and sheets of bark. Colin Farrell provides tension and dark humor as Valka, the dim-witted murderer whose loyalties are unpredictable.

But in a film that is mostly about walking, much of the film’s emotional core is provided by the touching performance of Saoirse Ronan as the gypsy outcast, Irena, who unifies the group by loosening each members reticence and sharing their backstories with the others. At first rejected by the group, later embraced by them as their darling, Ronan’s glowing portrayal of Irena is central to the film’s most touching image enhanced by inspired cinematography and direction. 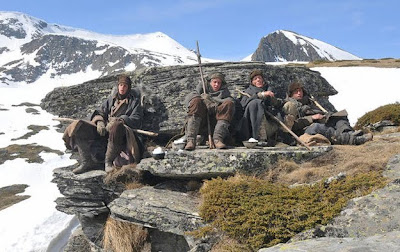 Although the film’s main conflict depends on magnificent cinematography of amazing stretches of wilderness and the suffering endured to cross that wilderness, the journey and the bare existence of the trekkers are depicted in memorable detail: fighting wolves off a carcass and then fighting each other for raw meat just like the wolves; tracking, catching, and eating a snake; suffering from swarms of insects; surviving on the bare necessities they carry: one knife, a pot, a few cups, coats, and the sticks they pick up as walking staffs; sucking the last bit of moisture from a rag. 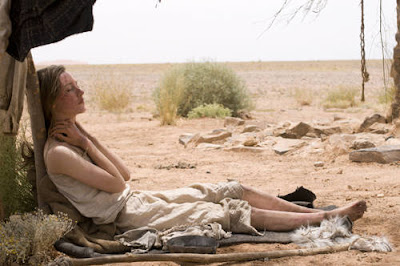 Posted by Richard Bellamy at 5:00 PM

Hokahey: I'll admit I had my own issues with THE WAY BACK (stilted, manipulative) but I recognize it is loved by many and appreciatiate your very fine effort here to frame it favorably. I am happy to see you are mostly on board for THE CONSPIRATOR, even with those your disadain for what appears to be a conscious parallel with teh present. As you rightly note, the courtroom scenes intensify and the one is easily led to believe (as history implies)that there was grave injustice in the military court's verdict. But there is much to admire in the deft use of a small budget and the performances, especially Wright's.

I haven't yet seen WATER FOR ELEPHANTS.

And Google just booted me as I tried to leave a comment. So this is take two ...

... ineffective depiction of the assassination of Lincoln that feels like it’s merely going through the motions ...

That's not untrue, but I enjoyed the way the attacks are weaved together, not to mention the attention to detail in the Seward attack and the moment when Booth enters Lincoln's private box at Ford's. It all makes me want to see how Spielberg will handle it, of course -- with more presence, I have no doubt.

I haven't seen the other films you mention. Elephants looks just like the movie you described (although I wouldn't have guessed it's funny), but it also looks visually lush, so I might end up seeing it.

Sam - thanks. Yes, there was much to admire in Redford's film. Again, Evan Rachel Wood was great - hardly the angsty teen she usually plays. I liked how it was made clear by Stanton that the nation needed to hang some conspirators and get on with it. After losing more than 300,000 Union soldiers, the nation was not in a forgive and forget mood. This was well done and believable. Also, there was an artsy tone to the cinematography, the blurry dreamlike effect, that set it apart from a flat made-for-TV look.

Jason - Google let you through.

You're right about the Seward attack. That was well done - and it's a little-known episode. Yes, the assassination includes some nice historical details. Depictions in older movies often leave out Booth stabbing Rathbone before leaping from the box.

I think Water for Elephants is worth seeing. It was enjoyable visually. Also, although it was formulaic, it was kind of different - a circus with a Captain Bligh in charge.

Concerning Water for Elephants, I agree with you about the weakness of the frame narrative. I tended to view Walz's performance in terms of how much less compelling this movie is in comparison to Tarantino's. While the movie did have its visual moments, and its hints of a fun circus social life, Water had massive problems with casting. Did you think that Reese was right for her role? She struck me as too smart and wired to play the glamour queen.

I also kept noticing parallels between Elephants and Titanic. Both have a frame narrative where the principal character reflects back on her/her youth. Both Walz and Billy Zane play humorously old-fashioned Snidely Whiplash melodramatic characters.

FilmDr - Thanks for your thoughts. I thought Witherspoon did a good job. She played the victim well, and she may have been smart, but she had become tied to August at a young age, so she found it hard to break away from him.

The Titanic parallels are interesting, and August is the same sort of villain. Jacob is the dashing young wanderer. As for the old geezer looking back on the past - it worked in Titanic (even though some of the modern-day characters, like the computer geek, were very irritating in a way that Cameron knows well), but in this movie I just found Hal Holbrook silly.

Nice article ,thanks for the information.