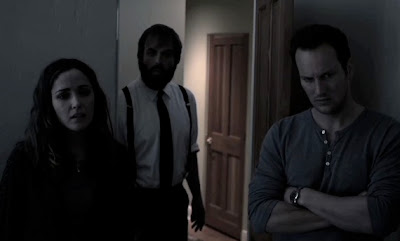 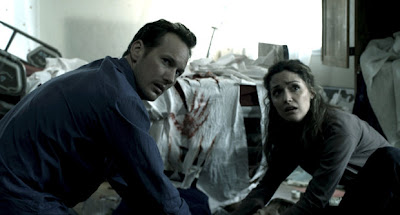 Josh’s journey through a lightless murk teeming with scary things to the bizarre realm of The Further is one of the best sequences I’ve viewed this year. Much is made of this dark void and the entities that drift through the obscurity. The puny lantern Josh carries seems strangled by the darkness, and this accentuates the threat. At the core of the murk lies a bizarre limbo of lost souls. Here, creepy images, "Tiptoe through the Tulips," and a weird tribute to Saw make this a hellishly frightening place to be.

Wan does a lot of things right. Refreshingly, he keeps the camera steady – no shaky handheld effect; no camcorder point of view; no dependency on CGI-produced gruesomeness. A drawback might be the "I" in the title and the film's cliffhanger ending. I prefer one-off horror movies, but a sequel could succeed if it employs Wan's talent for dark lighting and dark figures placed in the right place at just the right time. As the bedeviled couple, Wilson and Byrne offer invested performances that always draw our sympathies for their plight, and we readily identify with their terror of demons in dark places.
Posted by Richard Bellamy at 6:00 PM

I really like Rose Byrne. Too bad she keeps appearing in movies I can't bear to watch.

Jason - Byrne is especially good in this movie and she plays a wider range of emotions than in Knowing in which she mainly looks distressed. It's also fun - and a masterstroke of plotting - that she demands that they leave the haunted house - and they DO!

This movie is truly scary. I was still thinking about it today before I got your comment.

I wasn't a fan of this film at all Hokahey, but I'm certainly willing to allow for a far more appreciative position, especially one as well-delineated as this essay has been. And I will admit that the use of 'Tiptoe Through the Tulips' was eerie and unsettling. At some point I'll see this a second time (on DVD no doubt) and I'll keep in mind some of your contentions. I recalled THE STRANGERS while watching it las week at my local multiplex with three of my kids.

I do hope you will write something on THE CONSPIRATOR, which I saw over the weekend. Some critics have had issues, but I am willing to defend it to the hilt. Redford has done a great job humanizing this little-known sub-plot of the Lincoln Assassination literature. But I'm a lifelong Civil War buff and Lincoln fanatic, so perhaps I'm a bit biased.

Sam, thanks for the comment. I can see the objections one would have with this movie. But there are very unsettling elements, as you say. I saw it a second time and noticed more - in the shots during the credits there are faces and footprints.

As for The Conspirator I'm dying to see it. I'm into the Civil War in a big way. (I made a doc for my history class incorporating footage of Antietam battlefield along with toy soldiers staging parts of the battle.) But I am jealous of you big city folk. It has not hit Cape Cod yet. I may have to go up to Cambridge if it doesn't get here quick.

Sam - In case you are interested in the Civil War doc. I made for my history class - I was fortunate enough to have Jason of the Cooler include it in his post on the documentary Marencol. Take a look.

I just checked it out at Jason's place I am truthfully awestruck Hokahey! It's utterly fantastic!! I tip my cap to you several times for this. Geez, it's as compelling as the best re-enactments and it's endlessly creative to boot! Well, now that I see just how much into the Civil War you are, I might well have to urge a special trip to Cambridge, though to be honest it's playing in all the multiplexes.

I haven't yet placed a comment at The Cooler, but I now see that Jason has a few issues. I don't share them, but I can respect where he's coming from. The best Civil War movie for me is GLORY1989), but the Ken Burns series in incomparable. For his limited budget I thought Redford did a great job, but I need to get on to a review.

Again, this doc is really buffo!!!

Sam - Thanks so much for watching, and thanks immensely for your appreciation; it means a lot to me! The student, who helped me the most with that movie, and I are now working a doc/reenactment of Pickett's Charge, using old Gettysburg footage I have and more soldiers.

"Playing in all the multi-plexes" - but just not on Cape Cod. What gives?

I agree, Glory is the best of the Civil War movies.

Give me the word when you've posted on The Conspirator.