"I've a feeling we're not in Kansas anymore." Oz the Great and Powerful 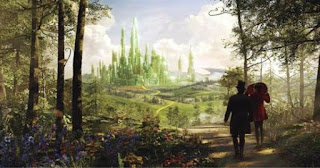 By employing a 4:3 aspect ratio, softly rendered black-and-white, and gray mattes depicting a drab Kansas farmland, Sam Raimi’s Oz the Great and Powerful immediately alludes to The Wizard of Oz and taps into all our nostalgic associations with that 1939 classic. In fact, the opening vignette, in which James Franco plays a carnival charlatan called Oz the Great and Powerful, is the best part of the film. The carnival setting, the pathos generated by a crippled girl who begs the Great and Powerful to make her walk, and Michelle Williams as Oz’s sweetheart who sees no future staying with the rootless showman, all these elements make us feel like we’re watching a 1930s film. Indeed, full close-ups of Williams’s face and her poignant delivery suggest that she would have been a screen star in the golden era of film. You find yourself wishing the film would continue to emulate the look and tenor of that decade in film, but then the tornado whisks us into a 2.40:1 CGI 3D fantasyland that is not as dazzling.

Sam Raimi’s Oz is an odd Oz. The CGI landscapes are flat and too colorful, so much so that you imagine the green screen set up behind the performers. There are funny characters that are not so funny, and wicked witches that are not so scary. In this origin story for Evanora/the Wicked Witch of the East (Rachel Weisz)and Theodora/the Wicked Witch of the West (Mila Kunis), the film strikes a couple of spooky chords with the silhouette of Theodora transforming into the sharp-featured West Witch. This is the film’s most chilling moment, much scarier than full-on close-ups of Kunis’s puffy pea-green face.

For the most part, this is slow-paced children’s fare that tries too hard to be endearing. Although Michelle Williams’s overly sweet act as Glinda begins to grow on you, Franco’s overacting wears thin. The best visual is an amazingly lifelike but oddly creepy china doll saved from a massacre at China Town perpetrated by the not-so-fearsome flying baboons, not monkeys. (Guess they evolve into monkeys later on.) The scene in which Oz fixes the little doll’s broken legs with glue is quite touching, but the scene in which she asks Oz to tuck her into bed at night is rather uncomfortable. Overall, the film features some engaging moments, but there is not enough in its over-long length to call it much of a success.
Posted by Richard Bellamy at 1:41 PM