"Why couldn't they just make a good movie of it?" - Spring Breakers 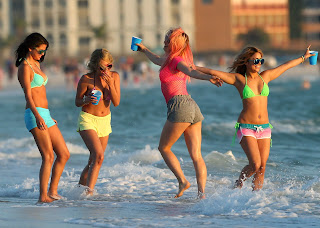 My daughter Jane’s idea of heaven would be Disneyland populated by all the Disney Channel stars from Hilary Duff to the present, and they would all be friends with her and have a great time. No, my daughter is not fourteen. She is twenty-five and she has Down syndrome. and her heart is always innocent and pure, and if a genie in a bottle gave her a wish, she would be Selena Gomez. So, you can imagine, months ago when she heard that a movie called Spring Breakers with Selena Gomez and Vanessa Hudgens would be released this month, she was really excited. Even I was expecting it to be a light-hearted frolic like the genuinely entertaining Monte Carlo, which came out in 2011. But when I learned it was R-rated, I told Jane to watch the preview on her laptop, and she came to me later and said, disappointedly, “I don’t want to see that movie.” But I did.

In some ways, Spring Breakers is Dante’s Inferno for the 21st century. Faith (Selena Gomez of Wizards of Waverly Place), an ambivalent Christian fundamentalist, follows temptation in the form of her three college friends, Candy (Vanessa Hudgens of High School Musical), Brit (Ashley Benson), and Cotty (Rachel Korine) down the primrose path to ruin: spring break in St. Petersburg, Florida. At first, it’s just sin in the shape of alcohol and drugs, but then Faith learns that her friends robbed a restaurant with water guns and a sledge hammer in order to finance the trip, and she realizes that her friends are dangerous. Indeed, they may be more dangerous than Alien, the ghetto-raised rapper/drug lord/gangsta wannabe who bails the girls out of jail and then introduces them to a scary world of drugs and guns and feuding drug lords.

After a tedious amount of the kind of spring break debauchery you can see on reality TV, tit shots and girls making out with girls, the film gets grave and gritty, and I have to say that James Franco redeems himself for his horrid performance in Oz the Great and Powerful by doing a good job of playing Alien, a dangerous lunatic drunk on the veneer of power he derives from the wads of cash and the arsenal of guns he has piled up. He raps about all the “shit” he has, and then realizes that the girls, Candy and Brit, at least, are more shocking than he is.

The film layers on the gratuitous nudity and vulgarity, but it has a story that gets visceral, and even though Hollywood has a tradition of girls-gone-bad shockers and we’ve seen this kind of thing before, I must say that the film’s mounting dread is quite effective. The ending, however, is too artsy indie for my taste, and it deflates the film's seriousness. Still, Franco plays a believable sleaze-bag, and the girls are suitably outrageous. SPOILER AHEAD. When Faith descends farther into hell than she would like to go, in a scene that is grippingly evoked, Gomez strikes an extremely touching chord when she has nearly succumbed to temptation and has the strength to turn away. Jane would be happy to know that Selena gets away!

For Jane, I wish this movie had been another Monte Carlo even though there’s a side of me that enjoys a kinky, sordid drama like Domino (2005) with Keira Knightley or thirteen (2003) with Evan Rachel Wood. In a way, it’s too bad that an actress like Vanessa Hudgens has to grow up and demonstrate that she can say "fuck" and show some skin like the big girls, though Jane would be happy to know that Gomez sacrifices much less of her innocent persona on screen. This is in keeping with her character, but perhaps this was Gomez’s personal choice as well.

Yeah, it’s too bad we have to grow up. I don’t know how much Jane knows about the sins of the real world, but she knows enough about profanity that she doesn’t want to hear it in movies, and she knew from seeing the preview for Spring Breakers that this was one Selena Gomez/Vanessa Hudgens movie she had no intention of seeing. Jane would be happy to know that my 8th grade girls share her feelings. Toward the end of class on Thursday, as we spent some minutes talking about upcoming movies, I overheard one girl lamenting the nature of the R-rated Spring Breakers. With the same deep disappointment my daughter had had after seeing the preview, she said, "Why couldn't they just make a good movie of it?" For Jane and these girls, I wish they had.

Posted by Richard Bellamy at 11:08 PM