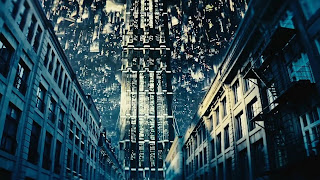 Upside Down, Juan Diego’s Solanas’ science-fiction, fantasy fairytale/fable, a French-Canadian effort released in 2012, is the kind of movie whose premise is better left unquestioned. You either go for the fantastical ride, or you get off the vehicle in disbelief. Here, Solanas takes the archetypal story of lovers fighting against incredible odds to be together and sets it on twin planets that share the same orbit but don't share the same gravity. In the film’s delightful, fairytale opening, young Adam (Jim Sturgess), of the downtrodden Down, falls in love with young Eden (Kirsten Dunst) of the ruling-class Up, and in order to be together, they must defy gravity.

Yes, names like Adam and Eden and, yikes, Aunt Becky; worlds called Up and Down; and pink bees with pink honey that holds anti-gravity qualities – all of these elements might be a bit too contrived and cutesy for some viewers, but if you find yourself chuckling in disbelief, all you have to do is look. The screen is always filled with the amazing vistas of these twin upside down worlds: mountain peaks hanging over mountain peaks; inverse clouds swirling away from the demarcation between the two different gravities; and a modern metropolis hanging over a dark, dismal land of ruin.

Interestingly, Down is also up if you're looking from Up, but Up controls Down's perspective, dominating Down with its imperialistic exploitation of Down's oil deposits and keeping its people subjugated. In Down, Adam lives in dark squalor and rides his bicycle past buildings in ruins, while Up is covered with glitzy skyscrapers. Upside Down immediately evokes Metropolis, in look and story, as well as H.G. Wells’ The Time Machine and When the Sleeper Wakes with their Upper World vs. Lower World paradigms. In fact, you'll find Upside Down reminding you of much more. When Adam, in an attempt to get closer to Eden, lands a job in the TransWorld Tower, a structure built between the two planets, he finds himself working on Floor 0 that is divided by the gravity border. In the film's most dazzling shot, an image of Kafkaesque bureaucracy that calls to mind but trumps the famous office scene in Orson Welles’ The Trial and Terry Gilliam’s office-from-hell allusion in Brazil, we see one office hanging upside-down over a mirror image.

From the very beginning, the film is a fantastic allegory for the hardships of any romantic relationship. In order to be together, Adam must throw Eden a rope, pull her down, and place her under an overhanging rock so that she doesn’t fall up to her planet. Later, after the young lovers have been separated and years have gone by, Adam must go to great pains to wear “inverse matter” that counters his weight and allows him to visit Eden’s world for short periods of time. Adam’s frustrating misadventures as an illegal visitor to Up, depicted with an absurdist tone that reminds us again of Brazil, add to the dark, dystopian atmosphere. Will Adam be condemned to pine for Eden in the dark, oily, rubble-strewn streets of Down, a dystopia etched out by art direction often reminiscent of Dark City but strikingly unique as well. Upside Down might stretch your disbelief with its liberal exploitation of its own devices, and it might grow too cute as an obvious fable saying, yes, if love can conquer all, love can conquer gravity, especially if you know how to use pink honey. But despite the degrees to which the film pushes its own fancies, every scene is visually engrossing, and if you have to pick someone to play the innocent, pure-at-heart object of a young man’s passion, Kirsten Dunst is someone whose smile could drive any man to defy gravity.


Posted by Richard Bellamy at 5:58 PM