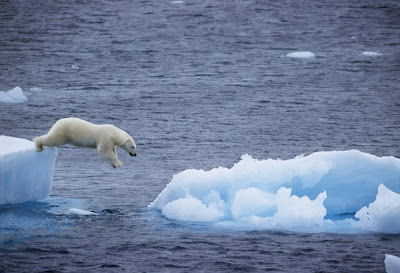 When it comes to nature documentaries, I definitely prefer the graphic predators-and-prey genre. (The March of the Penguins put me to sleep.) My favorite nature documentary is a National Geographic T.V. episode about the Serengeti. In one sequence, we follow a massive migration of wildebeests. When the wildebeests are forced to ford a swollen river, crocodiles leap out of the water and clamp their jaws onto the nearest meal. The crocs respond to instinct. The wildebeests try to survive the random lottery of death. What a fascinating conflict! The predator’s compelling imperative is as much a part of nature as the instinct that drives flocks of male penguins to protect their mates’ eggs from the cold, and I never feel sorry for the prey. Predators have to eat too!

Hoping for depictions of that compelling imperative, I went to see Earth on Earth Day. In the long tradition of Disney nature films, Earth, narrated by James Earl Jones, is a family-friendly look at the fascinating world of animals and their habitats depicted by means of stunning cinematography. Perhaps too ambitious for its 90-minute length, the film covers the activity in natural habitats ranging from the Arctic to the Antarctic. Along with wonderfully dramatic moments, the film specializes in images of animal multitudes that are beyond belief – the kinds of images we are used to seeing rendered by means of CGI. We see countless birds that blot out the frame and an incredible migration of Cape buffalo, but the most stunning crowd scene depicts a seemingly infinite herd of caribou spread out across the vast tundra. 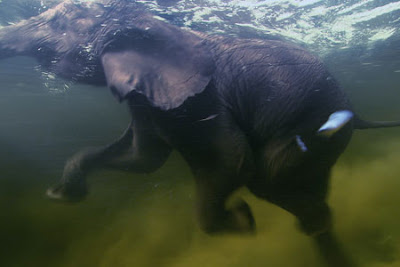 Earth truly earns its G-rating. It starts off in January with a polar bear mother and her two cubs that awaken from a sleepy winter and “ski” down the powdery slopes. The cubs are like “disobedient” children. Appropriately, the film’s pervading theme is the instinct of the mother to protect its young. In addition to the mother polar bear, we see a mother elephant guiding its baby toward water. In the film’s most touching spectacle, a mother humpback whale keeps in touch with its calf in stormy seas by slapping its flipper on the surface. Of course, the film plays for comedy as well. In the New Guinea jungle, a bird of paradise “scrubs” his “house” in preparation for a “date.” In describing the “partying” antics of the male as it dazzles a possible mate with outlandishly surrealistic plumage, the rich, sober voice of Darth Vader and Mufasa actually loses its dignity for a moment. Another fun scene shows elephants swimming - one of the most incongruous images in the whole world of animal behavior and one of my favorite things to watch - but these images are brief.

Then, on the Arctic tundra, a white wolf pursues a baby caribou. How far would this film go to shield us from nature’s imperative of predator and prey? After a long pursuit of doubtful outcome, the wolf finally snags the caribou’s tail. The end is inevitable though we never see the wolf chow down. In another scene, a cheetah pursues a gazelle. It looks like the desperate ungulate is going to give the world’s fastest predator the slip, but it loses its footing and the cheetah is all over its dinner. Then, in slow motion, the cheetah’s mouth travels almost caressingly along the gazelle’s neck until its teeth find the soft throat. In that instant, we cut to another sequence but the point is clear.

I wasn’t disappointed. This was dramatic stuff, leaving the gore up to your imagination. I was later quite pleased with an amazing scene in which forty lions take on a full-grown elephant and another scene in which great white sharks leap out of the water with sea lion flippers sticking out of their mouths – an image dwelt upon in very slow motion. Another episode of nature’s savage struggle is less fortunate for the predator. A starving polar bear that had been caught out on rapidly melting ice tries to get at a walrus pup protected by a phalanx of blubbery adults that use their long white tusks as lethal weapons.

Earth offers a diverse cast of trillions, majestic cinematography, and the mesmerizing drama of nature’s struggle for survival.

Posted by Richard Bellamy at 3:09 PM

Hokahey: Nice review. I haven't seen Earth and I won't, because I have seen all the footage -- it's cut down from the larger documentary series Planet Earth that ran (and still runs here and there) on Discovery in HD. (I don't think anything has looked better to this point on HD -- though the opening ceremonies of the Olympics came close.)

The TV series didn't exhibit a bloodlust, but it didn't shy away from showing some ugly kills or even attempted kills.

One of the most memorable sequences in the series includes a helicopter view of hyenas making a coordinated attack on their prey. I'm not sure a fictional chase has ever been so clearly, vastly and dramatically staged. Hollywood directors could learn a thing or two.

You're right. Hollywood directors could learn a lot from some of the situations in Earth. The drama of how animals hunt and pursue prey could easily be the basis of the some summer movie scene involving CGI monsters or aliens or transformers.