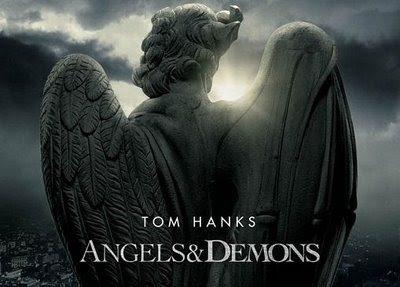 5. Tom Hanks must have the same hair stylist as Nicolas Cage.

3. Opportunities for actresses are so bad that one of them, Ayelet Zurer, was forced to take on the role of a character whose sole purpose is to listen to Robert Langdon solve puzzles involving obscure symbols and historical aracana that merely leave the viewer stunned by information overload.

2. Ron Howard thinks it's suspenseful when members of Rome's police force and the Vatican's Swiss Guards race across the city to try to prevent a murder we know has already happened.

1. Because of the phenomenal success of Dan Brown’s The Da Vinci Code, there will be more films, most likely starring Tom Hanks and directed by Ron Howard, based on novels written by Dan Brown. 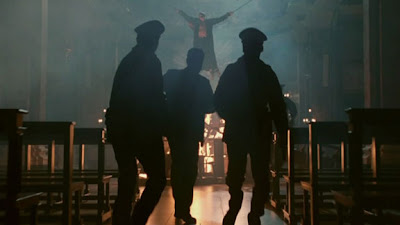 Another scary thing: the preview for Julie & Julia with Meryl Streep as Julia Child.

Posted by Richard Bellamy at 11:55 AM

I won't be able to sleep tonight.

Yes, thanks for the comment, and I agree - shudder. If this were a low-budget movie, it would have a right to be silly - but when so much money is spent on production values to spruce up a silly story, then it's a real nightmare.

I was more frightened by the thought that the theater was full of people who seemed to be entertained by Angels and Demons. Perhaps they were demonically possessed? No doubt, the success of this film is a certain sign of the apocalypse.

To be honest, though, I was more bored than frightened. I remember spending much of the film thinking that my ankles were cold.

Yes, it is scary that movies like this draw crowds. Part of that is the draw of anything Dan Brown. The Da Vinci Code craze! And what a vapid novel that is! I guess if you offer Tom Hanks, a mystery, urgent running from place to place, shooting, a little torture, explosions, and CGI crowds at Vatican City - then you satisfy a lot of people. This is getting scarier and scarier!