It's been both fun and visually dazzling following the meme started at The Dancing Image and Checking On My Sausages which involves posting a series of images unified by a common theme. This took me to images tracing The Fall and Redemption of Anakin Skywalker as well as images of Passion and Ressurection. Elsewhere I enjoyed a series examining Cinema and the Eye; a series showing John Ford's Doorways in The Searchers; and a look at images capturing moments of Dawning Realizations in various films.

My series of images is called The "Yes!" Moment. As this meme celebrates the "thrill of cinema," I can't think of a better contribution than a celebration of those "moments" in films we all love and yearn for - when imagery, plot, characterization, and theme all seem to come together in one thrilling "moment" when you feel awed - when your heart starts pounding - when you feel like jumping out of your seat - when you audibly cry out, "Yes!" - or you silently articulate in your mind that you are witness to a special moment in film.

Not having the time right now to get together a series, I plan to post a number of single moments over the next week or so. (The order in which they are presented is in no way an attempt to rate them.) 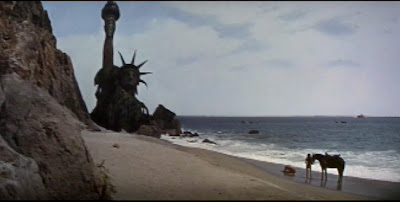 Oh, man! I don't think I've been more surprised by an image! I saw this movie at the age of 16 when it first came out and I was floored. I know I uttered, "Oh, yeah!" Other similar vocalizations rippled through the cinema. My heart was pounding. This is a quintessential "Yes!" Moment.
Posted by Richard Bellamy at 12:00 PM

I'm afraid I never got to see this moment unspoiled. It must have been quite a shock.

I look forward to see what other images you come up with.

Simon and Stephen - Thanks for the comments.

Stephen - We all yearn for the unspoiled surprise ending! I'm glad I had this one. Nowadays, you have to cover your eyes and ears during previews, avoid the Internet to get the surprises in films unspoiled.

Love this idea, and the two selections thus far! Tragically I can't say there are many new releases that have done this for me lately, but I got to relive one last week toward the end of The Princess and the Warrior, which I hadn't seen in about a decade. Really awesome moment right near the ending that stayed with me for years.

I guess if I had to think of something in theaters, Inception got close during the exploding Paris street scene, but that didn't last particularly long.

Thanks, Daniel. Yes, it's harder to come across "Yes!" Moments these days. There are a couple of them in Inception but it took me until second viewing to be really hit by them. I need to check out The Princess and the Warrior. I like Tom Tykwer's films.